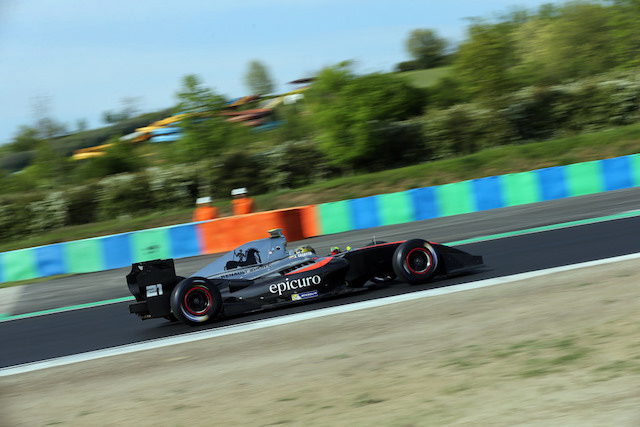 Johnny Cecotto?and RP Motorsport took victory in just their?third race in Formula V8 3.5 at the Hungaroring after?Tom Dillmann went off from the lead.

After a good start from pole, Dillmann had built a healthy lead before a mid-race safety car triggered when his team-mate Alfonso Celis?ambitiously tried to shut the door on Egor Orudzhev into the chicane, putting both into the gravel and out of the race.

On the lap after the restart, Dillmann ran deep at the penultimate corner and let Cecotto through.

In the final 10 minutes, Cecotto, Dillmann and Louis Deletraz were split by only 1.5 seconds but Cecotto managed to pull?away again at the end as he sealed victory.

As?Aurelien Panis made a slow start from the outside of the front row, it was Deletraz up into second at the start ahead of Cecotto but the rookie lost ground when he ran wide at Turn 11 in the early stages.

As well as a poor start, Aragon winner Panis also had poor race pace and struggled to keep up with the leaders. He did however hold?Matthieu Vaxiviere at bay, the SMP Racing driver having recovered after he?dropped behind?Roy Nissany?on lap two.

The Celis-Orudzhev clash – leaving the Russian without points from the first three races – promoted Beitske Visser into seventh, with the Dutchwoman keeping?Pietro Fittipaldi at bay late on.?Yu Kanamaru and?Vitor Baptista completed the top 10.