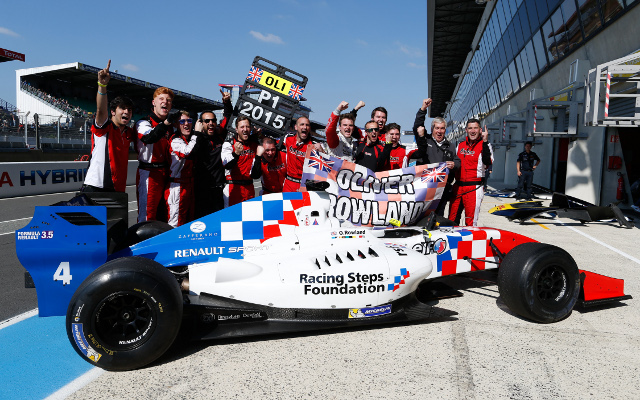 After the Formula Renault 3.5 and European F3 titles were both secured with one round to go, Peter Allen gives his thoughts on the two champions and their futures, and on their defeated rivals.

In being crowned champions in their respective series,?Oliver Rowland and?Felix Rosenqvist have wrapped up achievements that had been predicted by most at the start of the year. But they are impressive achievements nonetheless.

Starting a campaign as the pre-season favourite isn’t an easy position, and particularly not in a series where the cars are the same or similar. Here, the driver makes the difference and the likely champion is marked out based mostly on perceived talent and experience, even though a good team is necessary.

Expectations are big, and if they’re not met, there’s often nowhere to hide. Well-backed or not, a driver’s chances of progression in their career could be at threat if they don’t win a title they’re supposed to win.

And even if they do, it can be met with an air of indifference, as if it was easy and took no effort. But a championship victory by the favourite can be a very convincing one if it’s done in the right manner.

Rowland’s success definitely ticks that latter box. After finishing fourth in his rookie Formula Renault 3.5 season in 2014, and as the highest-placed driver to return this season, the pressure was definitely on him.

The statistics show a very convincing campaign, though. Rowland has won once at every round where there have been two races (and would probably had done so in Monaco had he not been hit at the first corner, or had the qualifying groups been balanced in his favour).

To be right at the front at every circuit is a level of consistency never seen before in FR3.5, and rarely seen in any single-make category. The Fortec team must take some of the credit for that, but there were weekends where its didn’t seem to be the fastest car, too, such as Silverstone. 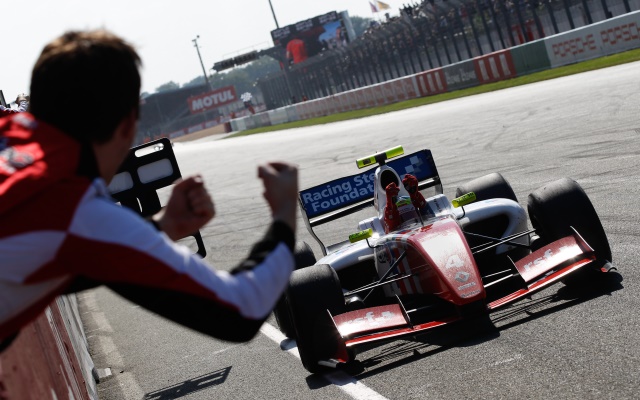 Of course the flip side of this stat is that Rowland hasn’t managed to pull of a double win yet – something he’s publicly targeted for a while now, and which has been achieved by his predecessors Kevin Magnussen and Carlos Sainz.

He’s let a few chances go begging but there have been some mitigating factors – the low-downforce setting mandated in one of the races at the early rounds played favoured other teams, while he was denied by the weather at the Nurburgring and by illness on Sunday at Le Mans.

He has matched – and could yet beat – Sainz’s record of seven wins in one season, as well as surpassing the record total number of wins and podiums. He’s also scored points in every races so far.

It could be argued that Rowland has not faced the same level of competition that his predecessors had, but his record compares favourably to them regardless.

What he doesn’t share with the last couple of FR3.5 champions is the support of a Formula 1 team. Therefore, although he would deserve a place in the top series next year, getting a place seems difficult with few vacancies remaining and a number of drivers on the market.

We pitched the tantalising concept of Rowland teaming up with fellow South Yorkshireman John Booth and racing for Manor, and the team’s pending move to Mercedes power won’t harm his chances given he’s been doing simulator work with the world champions.

Ultimately though, despite the great support that the Racing Steps Foundation provides, Rowland is likely to be up against drivers with larger backing. Somebody should take a chance on him, but we’ll have to wait and see if anybody does.

If no F1 chances comes up, Rowland could still boost his reputation further with a switch to GP2. He made a splash with his appearances at Silverstone and Spa – joining Stoffel Vandoorne on the front row at the latter – despite being with an unfancied team. 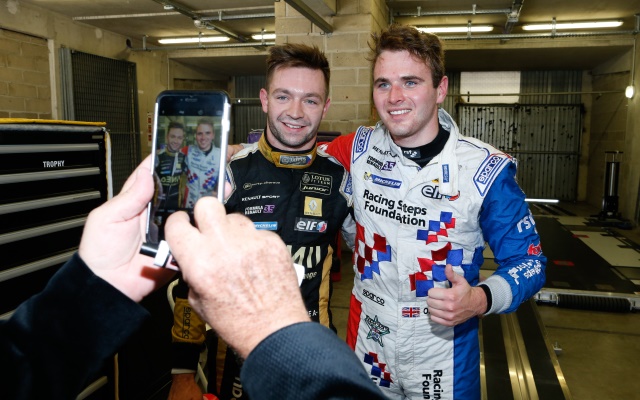 He’s bound to have offers from top teams next year, and he and RSF would be wise to give those serious consideration and continue the momentum gathered in his single-seater career.

Matthieu Vaxiviere might have not managed to take his scrap with Rowland down to the wire, but we’ve been very impressed with the Frenchman this year nontheless.

While Rowland carried race-winning form from the end of last year into this and repeated it consistently, Vaxiviere found a big step up from a promising run-in to 2014 in order to be able to give Rowland a pretty close run.

He proved his winter testing pace was genuine, and matched his rival by winning a race at four of the first six rounds. The dropping of the LDF rules stopped him from playing to his and team’s strengths, but even when results have been hard to come by in the last couple of rounds, his aggressive style in races has caught the eye.

There are still some rough edges for Vaxiviere to smooth off, but as he’s still only 20, he’s got time on his side. It will be interesting to see what he does next.

As for Rosenqvist, since his title comes at the end of his fifth season in European F3, it’s hard to get as excited about it as Esteban Ocon’s rookie triumph last year.

It would be unfair to entirely dismiss the Swede just like that, though. For starters, he has always been a frontrunner in the category, and ran Raffaele Marciello close for the title two years ago.

Every year he’s spent in European F3, the championship’s been won by a Prema driver. This was his first season with the Italian team, and he’s delivered.

Experience and maturity have undoubtedly been a big help and mean you can’t just label him as the championship’s biggest prospect because he’s won it, but his ability shouldn’t just be ignored either. 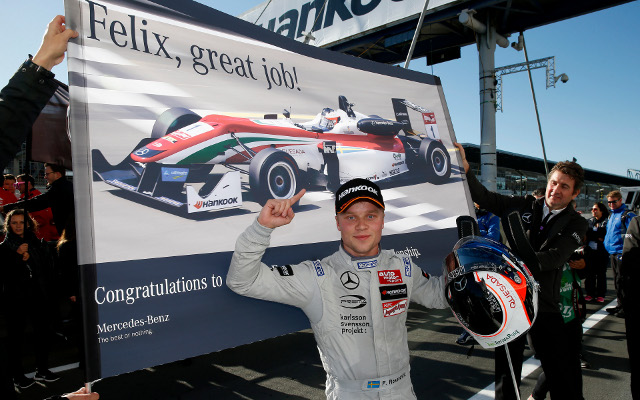 He seemed to be making hard work of it earlier in the year, but he’s been in a class of his own in recent rounds, and even with experience and in a strong team, that still shows a good bit of talent.

Rosenqvist is not a huge F1 prospect, but it would be good to see him get a chance at the next level. Although it’s a lack of funding that’s kept him in F3 for so long, there’s a good chance things could now change.

Success always helps, and in recent rounds an increased number of sponsors logos have appeared prominently on Rosenqvist’s car. Of course it’s not possible to judge from the outside what that might mean going forward, but it’s certainly a better sign than blank sidepods.

His Prema links could be a big help too – it wants to take part in F2 when it arrives, and there have been rumours of a move into GP2 as soon as next year.

Selecting Rosenqvist for that would give him a deserved chance at the next level and help establish the team as a competitive force, before team protege Lance Stroll likely makes a similar step in 2017.

Despite his experience, Rosenqvist was given a strong run for his money earlier in the year by Antonio Giovinazzi and Charles Leclerc, who both led the standings before Rosenqvist took control.

As the best-placed driver from last year coming back, Giovinazzi had pressure to win the title too. And he seemed to deal with it best early on with a consistent run, but some mid-season incidents and a lack of pace at the later rounds compared to Rosenqvist cost him.

There’s no need for him to be too downbeat about it though – again, to perform as well as he has in the company is a good job, and beating a driver of Rosenqvist’s experience in a team that lacked the same pace was always going to be difficult.

Leclerc was a revelation in the first half-and-a-bit of the season, but after he and Van Amersfoort Racing took the fight to Prema and Carlin early on, they’ve struggled to keep up with Prema since.

Leclerc has continued to do a very solid job in the circumstances, he’s wrapped up the rookie title and beating Giovinazzi to second in the standings is within reach.

But even if he finishes last out of the three – or even fourth – his relative youth and inexperience makes him still the most exciting prospect of the bunch.

Oliver Rowland wins race one to move to within a point of the title, and wraps it up with eighth in race two. Matthieu Vaxiviere‘s chances virtually end when he repeatedly cuts a chicane to stay ahead of Egor Orudzhev and is relegated from second to 10th, before finishing second to Orudzhev in race two. 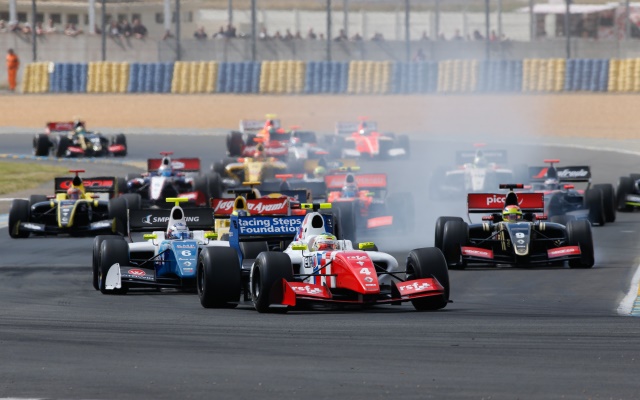 Ben Barnicoat scores his second straight win in race one, and Anthoine Hubert wins in race two as both make up ground on the championship leaders. Louis Deletraz and Kevin Jorg are now tied on points going into the final round with Jack Aitken seven behind, Hubert 15 adrift and Barnicoat 29 away.

Felix Rosenqvist wins all three races in comfortable fashion to wrap up the title with a round to spare. After finishing only 10th in race one, rival Antonio Giovinazzi is second in race two but then 13th in race three after contact. There are two podiums each for Nick Cassidy and Lance Stroll, and a first for Callum Ilott.

Lando Norris wins race one to extend points lead, and was on course to do the same in race three when he was hit while slowing for an incident. After winning race two, Ricky Collard could have pulled ahead but for also being involved in further chaos in a controversial race. Matheus Leist picks up the pieces to take victory instead. 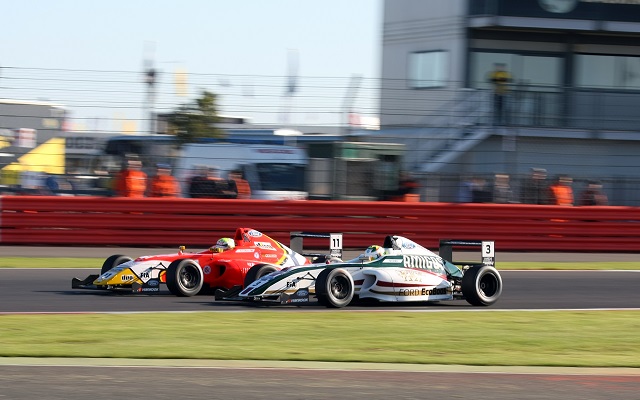 Will Palmer rounds out his championship-winning campaign with his 11th and 12th wins of the season – marking a 50 per cent hit rate. His team-mate Harrison Newey wins the reverse-grid race to complete a second straight HHC clean sweep and secure second in the final standings.

Valentin Moineault loses out to Giuliano Alesi in race one and falls to 11th in race two, but still extends his lead over Sacha Fenestraz thanks to victory in race three. Yifei Ye beats Nerses Isaakyan to a maiden win in race two, with Fenestraz third.