F2 champion Mirko Bortolotti dominates the F2 season finale, youngsters get their chance to shine in India and more champions are crowned…

Mirko Bortolotti had already wrapped up the FIA Formula Two crown on home soil at Monza last time out, but that didn’t stop him from producing a stunning performance in the season finale at Barcelona, denying local racers Ramon Pineiro and Miki Monras any glory in the process. The Italian defeated the Catalan duo in qualifying on Saturday morning to take pole for the first race, successfully coverting it into a victory with the fastest lap. He repeated that trick in very similar style on Sunday, ending a commanding season in a fitting way.

Next up for Bortolotti is a Williams test at Abu Dhabi, while Christopher Zanella and Pineiro will both get GP2 tests as well as FIA Superlicences. Zanella held onto the runner-up spot with Pineiro falling just four points short after his sixth and seventh podiums from the final eight races of the year, in which Zanella had missed the rostrum altogether.

The focus may well have been on the Formula 1 circus as they made their first visit to India, but a host of young drivers got their chance on the Buddh International Circuit in the support races. In the JK Racing Asia Series it was Lucas Auer who dominated proceedings, taking two pole positions and two fastest laps on his way to a double win.

Italian guest driver Lorenzo Camplese, a regular in Formula Abarth this year, was second in the first race ahead of Nabil Jeffri. Auer’s main title rival Afiq Ikhwan, winner of the last six races coming to India, lost his front wing in contact with Camplese and could only finish tenth. He made amends in the second race by finishing second, with Ifran Ilyas claiming third after Camplese and Jeffri had a coming together at the end. The series will return to Buddh for a four-race season finale at the end of November, with Auer leading Ikhwan by 32 points.

Also on the bill in India was the MRF Delhi Championship, an invitational event which attracted a number of international racers. It was one of those, Australian Nick Percat (a former Australian Formula Ford champion who won the prestigous Bathurst 1000 V8 Supercar race on his debut this year) who won the Saturday race from pole position. Formula Renault UK regulars Jordan King and Alice Powell completed the podium.

In the second race King and Percat made contact which put the Australian out of the race and allowed King to go on to win the $50,000 prize.

Back to Barcelona, where the Spanish-based European F3 Open season concluded. GP3 regular Zoel Amberg won the first race ahead of David Fumanelli and Matteo Beretta, with fourth place giving Alex Fontana the title. Fumanelli won the second race ahead of Amberg and Juan Carlos Sistos, with a penalty and the dropped scores system leaving Fontana’s final margin over Fumanelli at just five points. 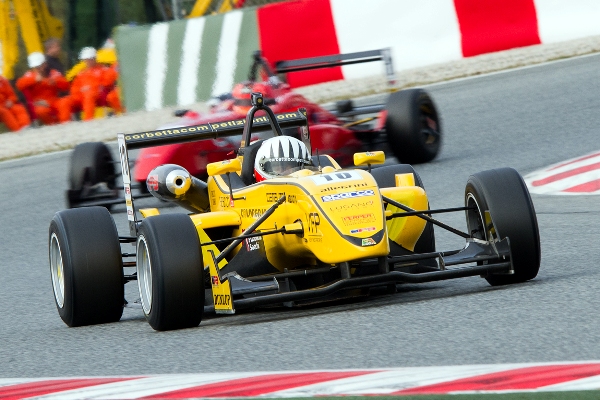 The French F4 Championship went to Paul Ricard for its final round of the year, with a double podium finish enough for Matthieu Vaxiviere to win the title. Pierre Gasly won both races, giving him third in the final standings behind Andrea Pizzitola. World Rally star Sebastien Ogier finished both races in fifth.

To South America, where the Sudamericana F3 Championship concluded at Brasilia. 25-year-old Fabiano Machado, already crowned champion, winning all three of the races.

Staying in Brazil, the Formula? Futuro Fiat series had its finale at the Velopark circuit, with 17-year-old Guilherme Silva overhauling John Louis for the crown by winning the very last race, from which Louis retired. Guilherme Salas had won Saturday’s race ahead of Silva.

PaddockScout Driver of the Weekend: Mirko Bortolotti – A fine way for the champion to leave the series, dominating the races despite the presence of two quick local racers in Monras and Pineiro.