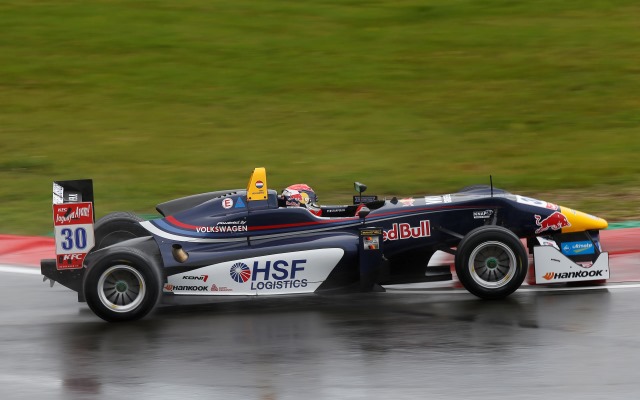 Max Verstappen mastered a wet Nurburgring to claim pole position for his first race as a Red Bull Junior in the FIA F3 European Championship.

The 16-year-old demonstrated the talent that had the top Formula 1 teams fighting for his signature until Red Bull announced him as their latest recruit on Tuesday. He sat over a second clear of his nearest rivals at several times during the session, finding an improvement every time a competitor got remotely close to his benchmark.

Chief rival Esteban Ocon as well as Lucas Auer had been his biggest threats for periods in the session but it was Ed Jones who came closest in the end. A late lap from the Dubai driver got him to within less than four tenths of Verstappen, only for the Van Amersfoort Racing ace to find one final improvement and move 0.649s clear.

Carlin driver Jones is in only the second weekend of his series return from a four-round injury layoff, and was a double podium finisher on his last visit to Germany at Hockenheim in May.

Santino Ferrucci wasn’t going to let Verstappen be the only karting graduate to shine in the slippery conditions, hovering around the top positions and eventually claiming third place to demote championship leader Ocon to fourth. The Frenchman could wrap up the title this weekend, but only if he can extend his current gap of 94 points over Verstappen and the rest to 150.

Antonio Fuoco moved up to second late in the session but was quickly shuffled down to fifth ahead of Auer. Spielberg first-time winner Antonio Giovinazzi recovered from electrical problems that hampered him in free practice to claim seventh.

That was one spot ahead of Jagonya Ayam with Carlin team-mate Tom Blomqvist, who was believed to have triggered a brief red flag early in the session. Roy Nissany beat his Mucke Motorsport team-mate Felix Rosenqvist to ninth place.