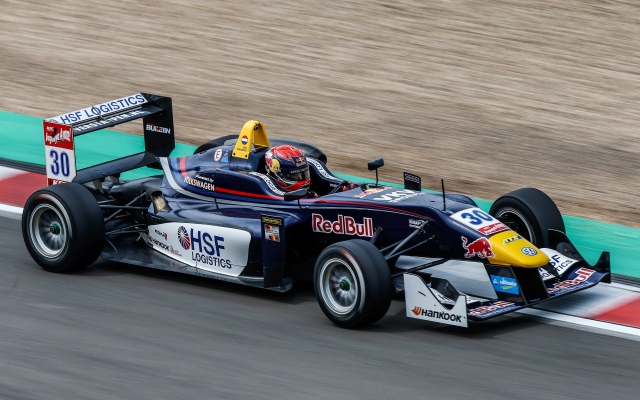 Max Verstappen took victory in his first race as a Red Bull Junior in race one at the Nurburgring, but only after Antonio Fuoco and Spike Goddard both led in damp conditions.

With the majority of the field starting on slick tyres, Fuoco started back in fifth but got a good start and was able to take the lead from Verstappen at turn two.

Meanwhile, Goddard started back in 20th but chose wet tyres and charged through the field in the early laps. Just as the Australian began to challenge Verstappen for second, Fuoco ran deep at turn one, lost the lead and dropped to third.

Goddard soon had the lead and began to open up a margin over Verstappen. The conditions quickly swung in the Dutch driver’s favour and he caught back up to Goddard, nosing ahead into turn one. The track was wetter there though, allowing Goddard to get the better drive off the corner and retain the lead.

Verstappen was able to get the move done for good one lap later, helped by Fuoco getting inbetween he and Goddard before the corner. Goddard was able to retake second, but only briefly.

Fuoco pressured Verstappen for much of the remaining distance, sitting only half a second behind at one point. Verstappen was able to open up a 3.275s lead late on though, while Fuoco defended second from fellow Italian Antonio Giovinazzi.

While, Goddard fell towards the back of the pack, Jordan King claimed fourth place after starting back in 11th.?Esteban Ocon and Tom Blomqvist both dropped back early on after starting on the wet side of the grid and swapped positions several times in the middle of the race, with the Briton eventually finishing seven seconds up the road in fifth and taking the fastest lap.

Verstappen’s win reduces Ocon’s championship lead to 77 points, meaning Ocon will now not be able to wrap up the title this weekend with 150 points available in the two remaining rounds.

Lucas Auer survived a spin at turn one on the formation lap to take seventh ahead of Mucke Motorsport team-mate Felix Rosenqvist, while third and second place starters Santino Ferrucci and Ed Jones slipped back to ninth and tenth respectively. Jones lost his ground relatively early on, while Ferrucci lacked place in the dry.

Goddard ended up 19th, one spot ahead of Andy Chang, who got up to fifth on wet tyres on his series debut but ended up a lap down.