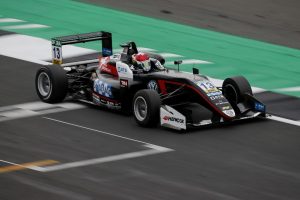 Motopark’s Fabio Scherer and Juri Vips shared the pole positions in the second European Formula 3 qualifying session at Silverstone, where the top 20 were covered by less than a second.

Scherer has never raced in Britain before, but managed to top the times on his first visit to Silverstone by a scant 0.049 seconds over Prema’s Mick Schumacher. It was also the Swiss driver’s first pole.

Vips was one thousandth of a second behind Schumacher with his best time, with reigning BRDC British F3 champion Enaam Ahmed going fourth fastest for Hitech GP and as the best home driver. The top four were covered by just 0.077s.

Guan Yu Zhou, who narrowly missed out on pole to Fenestraz for the first race, headed Prema team-mate Robert Shwartzman in ninth. Their title-contending team-mate Ralf Aron could only manage 13th.

On second best time it was Vips who took pole, ahead of team-mate Aberdein and Fenestraz. Schumacher led the Prema charge again in fourth, with team-mate Armstrong just behind.