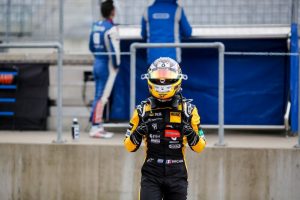 After topping both free practice sessions and much of qualifying it looked like Motopark driver Ticktum would take his sixth pole of the season. With four minutes to go though Fenestraz moved to the top, having finished second to Ticktum in both practice sessions.

Although Ticktum did improve, Feneztra bettered his own time and took pole for the first time since the second race at Pau back in May. Fenestraz didn’t set the fastest time for any of the sectors, and neither did Zhou, who put his Prema car in second with just under a minute to go, and less than half a tenth behind Fenestraz.

Five cars were covered by a tenth in third to seventh places, with Jonathan Aberdein actually setting the same time as team-mate Ticktum. As Ticktum set the time first he kept third on the grid, with Aberdein in fourth.

Prema duo Marcus Armstrong and Mick Schumacher were fifth and sixth, with Armstrong setting the best time for the first sector of the track. They were followed by Hitech GP’s Alex Palou and Enaam Ahmed, with reigning BRDC British F3 champion Ahmed being the man to the beat through the Maggots and Becketts complex in the middle sector.

Jehan Daruvala was ninth for Carlin, with he and his team-mates being the only drivers to do two runs, ahead of Motopark’s Juri Vips and Fabio Scherer.