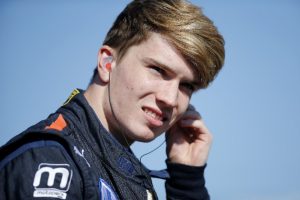 Dan Ticktum dominated free practice for his home round of the European Formula 3 Championship at Silverstone, topping both sessions.

Ticktum and his Motopark team-mates seemed to have the best set-up for the British track, with three of the six drivers topping the times at some point. Ultimately it was Ticktum who prevailed, by over a third of a second, with Carlin’s Sacha Fenestraz interrupting to Motopark stronghold to take second on both occasions.

Jonathan Aberdein was fourth fastest in the first session and third fastest in the second for Motopark, heading Prema trio Robert Shwartzman, Marcus Armstrong and Mick Schumacher. Prema had been off the pace in the opening session, but looked more confident in the second, with four of its drivers rising up the timesheets late on. The exception to that was Ralf Aron, down in 15th.

Marino Sato and Juri Vips were sandwiched by the Premas in front and Guan Yu Zhou behind in seventh and eighth, with reigning BRDC British F3 champion Enaam Ahmed completing the top 10 for Hitech GP in what was a disappointing morning for the local team.

Alex Palou was 13th fastest, although was sixth in the first session, while Ben Hingeley was 17th and European F3 debutant Charles Leong was 24th and last.

Surrey-based Carlin were similarly as poor, with Ferdinand Habsburg, Jehan Daruvala and Nikita Troitskiy only managing 11th, 14th and 18th.