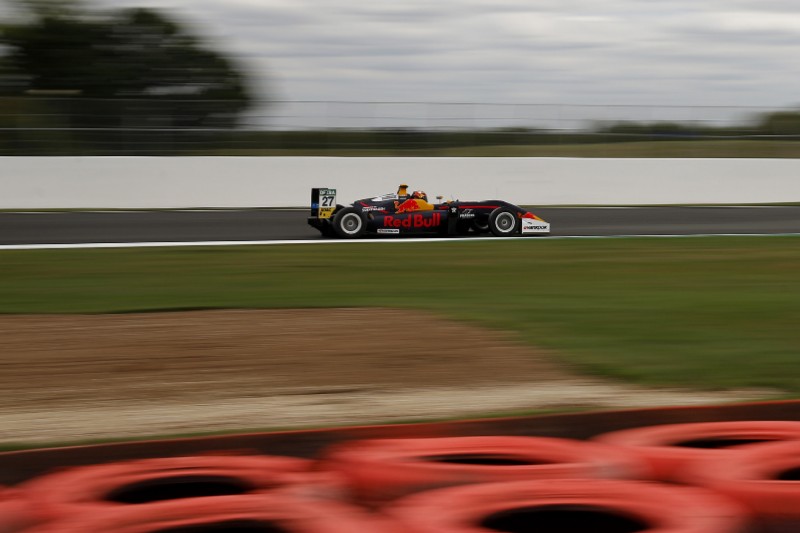 Dan Ticktum beat Sacha Fenestraz to victory in the first European Formula 3 Championship race at Silverstone after hounding the Frenchman for most of the race.

After bettering Prema’s Guan Yu Zhou on the outside of Luffield on the first lap, the Motopark driver stayed glued to the rear of race leader Fenestraz, although never quite close enough to commit to a challenge.

It took until the 14th lap of 19 for Ticktum to get a proper look, putting his nose in at Stowe before Fenestraz defended the inside line. A lap later he tried the move again, timing it later into the corner and getting alongside Fenestraz as a result. The Carlin driver went out wide on the exit, and Ticktum completed the move before they entered Vale.

He immediately pulled away from Fenestraz, stretching out a 1.6 second lead before a Full Course Yellow was required to move Ralf Aron out of the gravel.

Enaam Ahmed made it two Britons on the podium in third, moving past Jonathan Aberdein after the restart from the FCY period. Aberdein also lost a spot to Motopark team-mate Juri Vips after skating across the kerbs down the pit straight and almost going airborne.

Ben Hingeley and Marino Sato had the most exciting battle of the race, running wheel-to-wheel throughout for what eventually became 11th place. Charles Leong finished 19th on his European F3 debut.