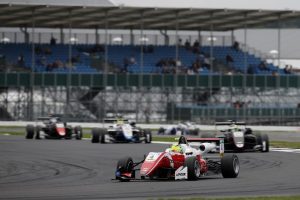 Mick Schumacher took his second European Formula 3 win of the season in a dominant performance at Silverstone.

A slow start by surprise poleman Fabio Scherer handed Schumacher the lead from second on the grid, and he broke away in the first sector to escape the slipstream.

From there he managed the tyres, retaining a lead of 1.5 to 2 seconds throughout, unwilling to repeat the rear-left puncture he and two of his Prema team-mates suffered in the first race.

The battle for second went between Motopark trio Sherer, Juri Vips and Jonathan Aberdein, with Aberdein the first to be dropped. Vips held on to Scherer, and slipped around the outside of Stowe with five laps to go as the Swiss driver’s tyres started to wilt.

Scherer then skated off the road, leaving Vips unpressured in second and gifting Aberdein his first podium. Enaam Ahmed followed up his race one podium with fourth place for Hitech GP, and was on Aberdein’s tail by the end of the race.

Prema’s Marcus Armstrong finished fifth, two places ahead of chief title rival and race one winner Dan Ticktum. Championship leader Ticktum started the race in eighth, but spent much of the race outside of the top 10. He kept his tyres alive though, and in the closing stages of the race rose from 12th to seventh.

The last place gained came at the expense of Sacha Fenestraz at Stowe, although the move is under investigation for a track limits offence.

Early in the race European F3 debutant Charles Leong clattered into the rear of Carlin’s Ameya Vaidyanathan, leaving them at the back of the field, but the Macanese driver managed to get away from the incident unpunished.