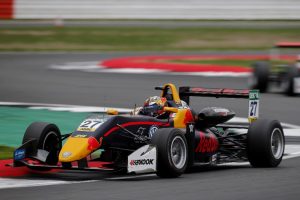 Formula 3 European Championship leader Dan Ticktum has been penalised for his move on Sacha Fenestraz for seventh in the second Silverstone race, reducing his points advantage over Marcus Armstrong.

Ticktum started the race in eighth but dropped down the order at the start, before rising back up to eighth by the closing laps to be on the tail of Fenestraz, who he had hounded and then overtook to take victory in the opening race of the weekend.

On that occasion he chose the inside of Stowe corner to complete the move, but with Fenestraz defending that line in the second race, Ticktum had to pick the outside of the high speed corner. Both drivers ran wide, and as they returned to the track Ticktum had the inside line on the run to the Vale left-hander, where he took seventh place from Fenestraz.

Ticktum pulled out a one second gap on the final lap, but the overtake immediately went under investigation and he was later handed a 1.5s penalty and dropped to eighth in the race classification. With Prema’s Armstrong finishing fifth, the championship lead that Ticktum gained in the first race is now down to 10 points. 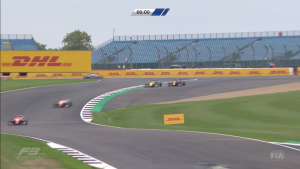 “It was a bit annoying really to get pushed off at the start,” Ticktum said after the race.

“I don?t know where I went back to, something like 14th. It was just about coming back through [after that]. The pace was really good, I think I fought well.

“The move for seventh is under investigation but I was pushed off the track, what was I supposed to do?”

In both races track limits at Stowe were mostly ignored, with drivers frequently running over the kerbs and the astroturf strip on the exit of the corner before returning to the track. None were penalised, although it should be noted that Ticktum gained a position when he ran wide.

“It’s interesting,” he said. “That will be something I?ll also mention to the stewards. Overall though I’m pretty happy.

“[Race one]?went very well. A lot of tyre management in that race, especially at the start. It?s nice to win at home, overtaking was a bit tricky as expected, but overall very very happy. Car was good and I managed the tyres.”

He will start seventh for the final race, two places behind Armstrong.

“I’m definitely confident for race three. My pace is by far the best on track.”