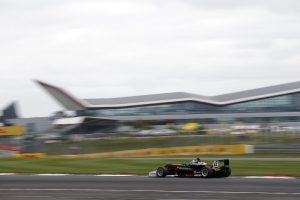 Juri Vips jumped up to third in the European Formula 3 Championship standings with victory in the final race of the weekend at Silverstone.

The Estonian started the race from pole after recording the fastest second best time in qualifying, with Motopark team-mate Jonathan Aberdein and Carlin’s Sacha Fenestraz just behind.

Both drivers attacked at the start of the race, with Vips moving to the inside to defend from his team-mate. This left the outside free for Fenestraz, who swept into second place.

Championship leader Dan Ticktum, another Motopark driver, got involved in the lead battle from seventh on the grid, but was then shuffled back down to fifth at they entered the Wellington Straight.

The next move for the lead came from Fenestraz at Brooklands, but all this did was put him into the clutches of those behind and give Vips some crucial breathing space.

Fenestraz kept with Vips as the race progressed, with those behind dropping back as they looked after their tyres. The gap between the top two came down to three quarters of a second at one point, but being in the dirty air of the car in front meant Fenestraz couldn’t remain there for long unless he pulled off a move, and he ended the race 1.177 seconds behind the winner.

Aberdein got a second successive podium in a row in third, a position he never really looked like conceding.

On the first lap Ticktum went for a move on Ahmed at Vale, but clattered the kerbs after his fellow Briton cut in on entry. Although there was no visible damage, there was no repeat of his late race charges from the first two races. Sixth place was enough to extend his championship lead though, as both of his title rivals from Prema, Marcus Armstrong and Ralf Aron, retired.

Armstrong broke his suspension after hitting the rear of team-mate Schumacher at the second corner on the first lap, while Aron was punted out of the race by Motopark’s Sebastian Fernandez and was also involved in an incident with Hitech’s Ben Hingeley. Recovering the retired cars meant the safety car was required, although this had little impact on the race bar enabling the drivers to look after their tyres.

Shwartzman spent most of the race in battle with Fabio Scherer for the final point, and the deciding move is under investigation as Shwartzman used the run-off on the exit of Stowe to complete the overtake. Ticktum is penalised for a similar move on Fenestraz in the previous race.