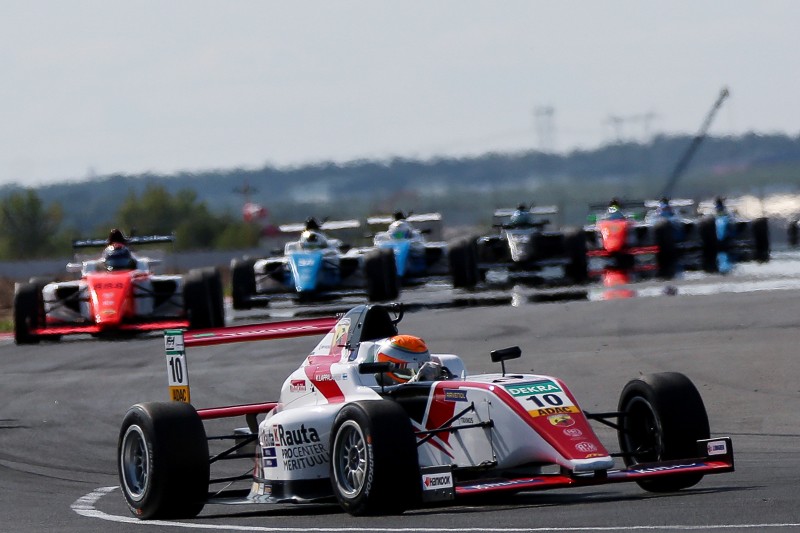 Konsta Lappalainen took the Formula 4 North European Zone lead at Autodrom Moscow, where he narrowly missed out on taking a triple victory.

Lappalainen took pole for the first two races, his sixth and seventh of the season, with the top four covered by less than half of a tenth for the first race. The grid was spread a little more for the second race, although Kart In Club Driving Academy team-mate Jesse Salmenautio was still only 0.023s behind in second place.

Race one started with a red flag, as Artem Lobanenko stalled on the grid and was collected from behind by SMP Racing team-mates Alexander Vilaev and Nikita Aleksandrov. The race restarted sans those three, and Lappalainen had an easy run to victory over team-mate Salmenautio. He also took the championship lead as MP Motorsport’s Isac Blomqvist could only start and finish sixth.

Lappalainen won again the second race, but he had to work harder for it.

“My start was quite bad,” revealed Lappalainen. “First few laps I was under pressure but then the guys started fighting behind me, so I had a chance to pull away.”

His victory gap of 5.7s was consistent with the previous race, suggesting he had victory in hand regardless, although this time Belov and third KICDA driver Tuomas Haapalainen got the better of Salmenautio. Blomqvist once again failed to make progress from a low starting spot, marking his worst finish of the season in seventh.

MP still had cause to celebrate though, as Cordeel converted pole into victory in the final race of the weekend. Once again the start was interrupted by a clash between Lobanenko and Aleksandrov, but once the safety car returned to the pits a battle started to emerged between Cordeel and Lappalainen.

The difficulty of overtaking around the track, which is located 31km away from Moscow city centre, meant Lappalainen couldn’t find a way past, and he came short of a triple win by less than a second.

Belov completed the podium, ahead of Salmenautio and Blomqvist.