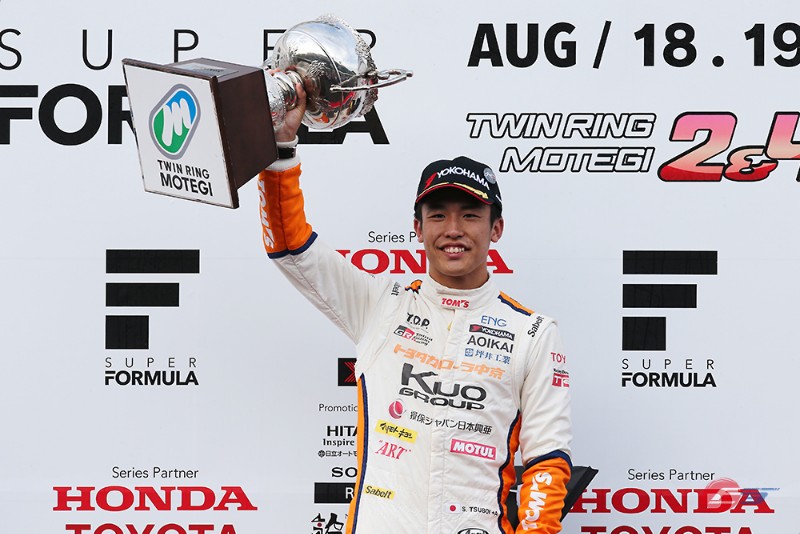 Sho Tsuboi added another three wins to his 2018 Japanese Formula 3 tally at Motegi, where the title fight slimmed down to just two cars.

TOM’S driver Tsuboi started another weekend of domination by breaking the track record in qualifying, with team-mate Ritomo Miyata joining him on the front row for the first two races. After making a clean getaway Tsuboi controlled the first race, with Miyata the only driver to be vaguely close, 3.314 seconds behind.

Toda Racing’s Toshiki Oyu took the final podium spot by diving down the inside of Turn 1 on the first lap and never let go, taking his third ‘best of the rest’ victory behind the TOM’S drivers. Yu Kanamaru was less than a second behind in fourth for B-MAX Racing, challenging Oyu on more than one occasion despite dropping down the order after one of his attempts.

Oyu’s team-mate Sena Sakaguchi finished fifth after also making an overtake at the start. The final point looked like it was going to ThreeBond’s Ukyo Sasahara before he retired with a clutch issue, leaving Yoshiaka Katayama to take sixth place.

Miyata’s best chance of winning the second race came at the start, and after failing to take the lead he spent the remaining 14 laps lingering in Tsuboi’s mirrors. He was never close enough though, and Tsuboi took a victory by 1.448s.

Former World Series FV8 3.5 driver and Euroformula Open race-winner Kanamaru finally added a Japanese F3 podium to his CV in third, admittedly over 14 seconds behind the TOM’S drivers. He very almost lost the podium too, with Sasahara right on his tail on the final lap and almost making it past at the final corner of the last lap. Sakaguchi and Oyu completed the points.

The race one result set the grid for race three, meaning more hard luck for Sasahara and another opportunity for Miayata to beat his team-mate. He made an even worse start than in the previous race though, having to defend second place briefly, and it gave Tsuboi all the time he needed to get comfortable up front.

After a first lap tussle, which ended with Sakaguchi briefly stuttering to a halt with engine issues, the battle for third became nonexistent, with Oyu creating a gap over Kanamaru, who had in turn pulled away from Katayama. Shunsuke Kohno and Sasahara came close to challenging for fifth, but there was no changes of position, meaning Kohno got the final point.

Kanamaru’s team-mate Kiyoto Fujnami drove well in all three races after missing the previous round at Okayama, but continued his pointless run this season. Australian Jake Parsons took all three National Class wins for NODA Racing, and is now officially champion. His next ambition will be an overall top 10 finish, having got a best of 11th this season.