It was all about World Series by Renault this weekend, as 3.5 and 2.0 drivers took to the track at Moscow Raceway?

Stoffel Vandoorne entered the Moscow Raceway weekend 29 points off the top place in the standings, albeit following a very impressive home victory at Spa. Still, there was little in the way of signs that the weekend would turn out as it did, with Vandoorne showing lesser pace than on-form championship leader Kevin Magnussen throughout all of practice.

On Saturday, however, the tides were turned completely. Vandoorne stormed to pole for race one, coming out on top after a very hotly-contested session. He got a good launch off the grid and, 45 minutes and a lap later, he crossed the finish line with no competition in sight and some more silverware to his collection.

The pattern continued on Sunday, except the Belgian looked even more impressive and confident. He was untouchable in qualifying, managing to time his quick laps just right despite the two red flags and generally being a lot faster than the rest of the field. The race was more of the same – good start, huge gap at the checkered flag, more silverware and a new WSR record as the reigning Eurocup champion became the first driver in the history of Formula Renault 3.5 to secure both poles, race wins and fastest laps during the weekend. If Vandoorne’s title claims were at all in doubt before the weekend, this is the round that has proved the sceptics wrong. In fact, this could very well be the weekend when the Belgian emerged as the title favorite.

Whilst Vandoorne’s heroics completely overshadowed the rest of the field, there were some other notable performances. Championship leader Magnussen looked very much on-pace throughout the weekend and was set to minimize the points loss to Vandoorne, qualifying in third for the Saturday race. However, while the lap itself was very good, the rest of the session for the Dane was far, far from, as he was deemed to have blocked two drivers and lost two of his best times, which demoted him to 17th on the grid. A noticeably angered Magnussen put on a good recovery drive to finish 11th on a track that didn’t lend itself to overtaking, but in the end still saw his advantage over Vandoorne wiped out in an instant. In race two, he was the best of the rest, making up one position off the start, but not having enough race pace in the DAMS car to challenge Stoffel for the win. 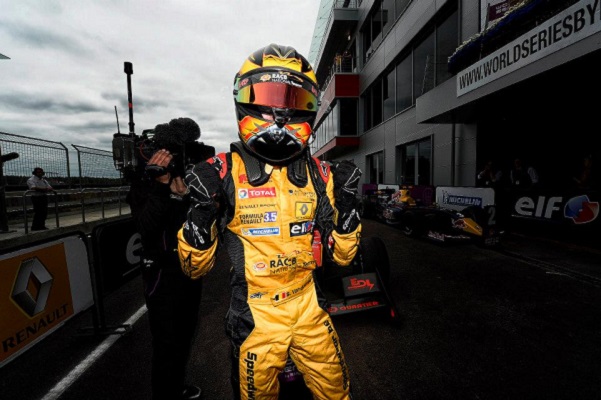 There was no stopping Stoffel Vandoorne at Moscow Raceway (Photo: Renault Sport)

The third of the usual contenders – Antonio Felix da Costa – had a weekend that was eerily representative of his year so far, with some fantastic pace overshadowed by constant troubles. He qualified in second for race one and finished as he started, complaining about a malfunctioning exhaust during the post-race press conference. The exhaust trouble would prove to be the least of his problems for the round, as the Portuguese driver was among those caught out by the late red flag in Sunday qualifying and, having only secured 13th on the grid, would soon find himself damaging his car in a tussle with Matias Laine. While Vandoorne and Magnussen now sit at 136 and 133 points respectively, a non-score in race two for the Red Bull junior means he is only at 89 – a less than ideal position with only four rounds to go.

Laine’s teammate, Will Stevens, put in two absolutely top-notch performances at Moscow Raceway. He was one of the few to manage any passing on-track in race one, finishing in fourth after a solid race. Mechanical problems kept him out of Sunday qualifying until the very end when the Briton managed a stunning quick lap that put him on the front row. He lost a place to Magnussen off the line, but managed to bring the car home on the podium, his third of the year, putting himself only eight points off of Felix da Costa. It is yet unknown whether the Portuguese driver is exempt from the RBR F1 car demo at Silverstone and, should he happen to be, Stevens will be the one to get a shot.

Nigel Melker was also on good form, lining up in third on the grid on Saturday and converting it to his second podium of the year. He had no luck in race two, though – being caught out by the red flag and then losing lots of track position on lap one. Instead, it was the other Tech 1 driver, Mikhail Aleshin, who picked up the slack on Sunday, recording his best finish of the season in fifth.

Finally, Will Buller had an absolutely mighty rookie outing in Formula Renault 3.5. While he didn’t manage to score in both races, his form on Saturday was exceptional, as Will held off much more experienced Formula Renault drivers to take fifth on his debut. 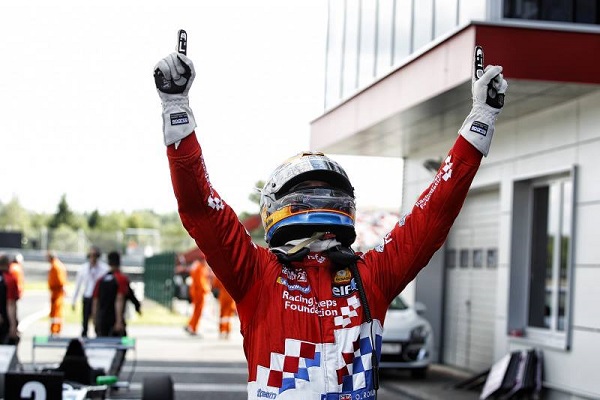 Entering the weekend, Frenchman Pierre Gasly found himself atop the Eurocup standings, despite still pursuing his elusive first win in the series. His turn finally came at Moscow Raceway. Having set a blistering laptime in his qualifying group, Gasly put his car on pole for the Saturday race and went on to dominate the proceedings, increasing his lead in the championship.

And then there was Sunday. Again, a near flawless qualifying from Gasly put him on the front row and, into turn one, the Frenchman was leading the race. However, a couple of corners later he was tapped on the back of his car and sent into a spin. In a desperate attempt to salvage something from the race, Gasly rejoined the track in a matter that the word “unsafe” doesn’t do justice to and emerged sideways on-track in the path of oncoming traffic and under audible groans from the media center. He was then collected by a completely innocent Denis Korneev. Gasly’s antics cost him the championship lead, but the reprecussions could’ve been much more than that. After a lengthy visit to the stewards, the Frenchman was given a five-place grid drop for the next race, which was, by all accounts, an easy let-off.

As Gasly faltered, it was Oliver Rowland who picked up the slack. The Briton was very quick in practice, but didn’t quite manage to match his main rival’s pace in the qualifying sessions. In qualifying one, he narrowly missed out on pole and followed Gasly to the checkered flag in second in the race. In qualifying two, he was second in group, but a good start allowed him to slot in right behind Gasly. Contact followed, which was latter ruled to be a racing incident, and Rowland escaped with little damage, holding off the opposition to take his second win of the season and the series lead.

Finally, the only man to match up to the duo this weekend was Lotus junior Esteban Ocon. Ocon came very close to the podium in race one and, putting in a spectacular qualifier lap on Sunday, started race two from pole. He got away from the line alright, but was forced wide by fellow front row man Gasly, letting his compatriot through as well as Rowland. For the rest of the race, Ocon put a lot of pressure on the Brit for the win, but ultimately came a couple laps short of making the move. Still, only 14 points behind the lead and eight behind Gasly, his title ambitions look as good as ever. 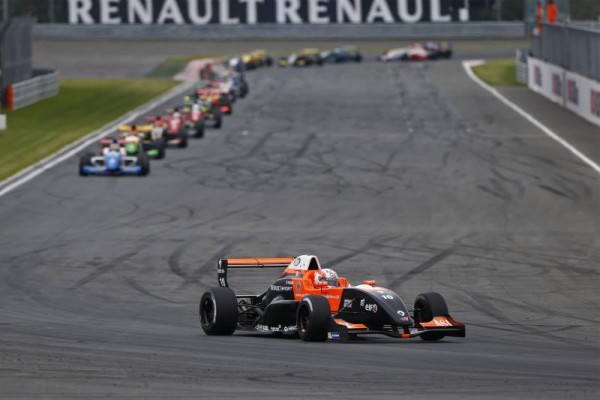 Joining the usual frontrunners on Saturday and Sunday’s podiums were two relatively new faces. On Saturday, third-place honours went to Steijn Schothorst, who finally managed to turn things around for himself after a rather slow start to the year in the Eurocup. On Sunday, it was another Toyota Racing Series 2013 driver in Ignazio D’Agosto, who generally looked very comfortable at Moscow Raceway and did very well to hold the rest of the field off to take KTR’s first podium of the year.

On the other hand, some of the expected title favorites found themselves struggling. Oscar Tunjo was involved in an incident in race one, robbing him of any chance at points, but recovered the weekend with fourth in race two. Matthieu Vaxiviere continued to struggle after an excellent performance at the season opener, only scoring six points at Moscow Raceway. Finally, Nyck de Vries was still not back up to his 2012 form, with only one tenth place to take away from the two races.

Report: Gasly triumphant in race one at Moscow Raceway

Harrison Scott‘s maiden pole at Croft marked the first time in the season that Dan Cammish would miss out on starting a race in first – 13 events in. It seemed like Cammish’s other streak was also in danger, but it was not to be, as the man from Leeds took full advantage of Scott stalling on pole to take his 13th win in a row. He made it 14 and 15 respectively, starting the next two races from the front of the grid and adding another two lights-to-flag victories to his CV.

Recovering from eighth in race one, Scott was second in the other two races, whilst Argentinian Nico Maranzana made it three out of three for weekend podiums. For race one, the top three was completed by his compatriot Juan Rosso.

At the halfway point in the season, Cammish leads Maranzana by 150 points, with Scott a further eight behind.

Julian Santero continued to bolster his championship lead during the two weekend’s races at Cordoba, where he was the only man to stand on the podium for both outings. He started the first race from pole, but lost out to Manuel Luque, settling in for second. He took advantage of race two poleman Luque retiring to bag his fifth win of the season in seven races.

Amadis Farinas completed the podium in race one, whilst in race two, Manuel Mallo and Agustin Lima followed Santero in the top three.

One of the easier calls we’ve ever had to make in this segment and for good reason. The Belgian has won the Eurocup, yes, but there has been no performance in his career that underlined just how good he is better than the Moscow Raceway outing. Two wins, two poles, two fastest laps, two races led from green to checkered. There is nothing more Stoffel could’ve done this weekend and nothing he could’ve done better.