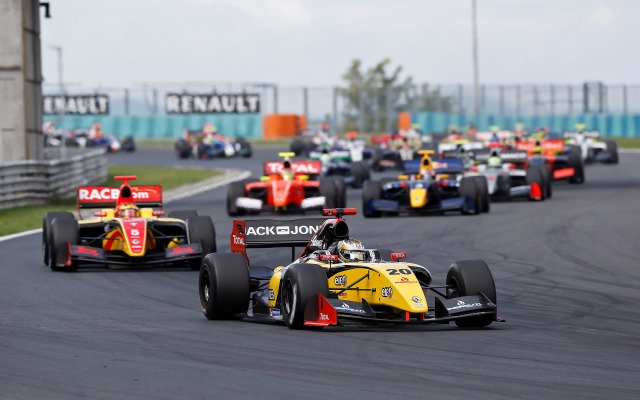 Nico Muller and Antonio Felix da Costa return to the top step of the podium in Hungary while Oliver Rowland and Pierre Gasly continue their title fight in FR2.0…

Muller excels in the wet, Felix da Costa defeats his rivals in the dry

Kevin Magnussen has moved closer to securing this year’s Formula Renault 3.5 title as he put further space between himself and nearest rival Stoffel Vandoorne with a pair of second place finishes at the Hungaroring. His weekend got off to a difficult start when a rain-savaged Saturday morning qualifying session left him starting the day’s race from 16th. The difficult conditions continued but the Dane surged through the field on his way to second. Sunday qualifying was much stronger as Magnussen qualified on pole, but he was denied the win by Antonio Felix da Costa.

Vandoorne also had to work his way up the order in Saturday’s race, coming from 11th to finish fourth but unable to stay with Magnussen. He was able to match his fellow McLaren young driver on Sunday but couldn’t find a way past, forcing him to settle for third. Finishing behind his rival on both occasions means that Vandoorne is now 36 points behind Magnussen, conceding that the title is now the latter’s “to lose” over the final two weekends.

With a Toro Rosso F1 seat up for grabs, Felix da Costa came back from a two month break with the pressure truly on and it seemed to show on the first lap of Saturday’s race when he tangled with Mikhail Aleshin, ending his own race. To the Red Bull Junior’s credit he admitted his mistake – labelling his attempted move for third place on the Russian veteran as unnecessary and optimistic – and picked himself up on Sunday. Landing a place on the front row with a late lap, he initially slipped to third behind Vandoorne but nailed his pitstop window to leap ahead of the two McLaren men and pull away to his first race win since the opening weekend at Monza. The result promoted him back up to third in the standings, albeit 79 points off Magnussen.

Another driver returning to the top step in Hungary was Nico Muller. After going through a lean spell since his Monaco victory, he excelled in the wet in his Draco car and won Saturday’s race by a dominant margin. In the dry on Sunday he returned to his more familiar form as he finished fifth on the tail of fourth-placed Nigel Melker – the former GP3 rivals now also occupying the same positions in the standings. Will Stevens was the big loser in Hungary, following an eighth on Saturday with a nightmare on Sunday as he crashed out in both qualifying and the race. The recent Caterham recruit slipped from from third to sixth in the standings as a result.

Marco Sorensen headed to Hungary off the back of his double win last time out in Spielberg and the Lotus junior showed good form on Friday but struggled in the wet on Saturday. He qualified fourth on Sunday morning but suffered a dreadful start and could only finish ninth. With the pressure on to prove himself ahead of his impending F1 graduation, Sergey Sirotkin finished a fine third in-between Magnussen and Vandoorne on Saturday – his second podium of the campaign and his second in wet conditions. Various issues prevented points on Sunday but the rookie has now moved into eighth in the standings ahead of third-year Arthur Pic, who ran fourth on Sunday until a ‘racing incident’ with Melker forced him out.

Next round: Paul Ricard, 28-29 September 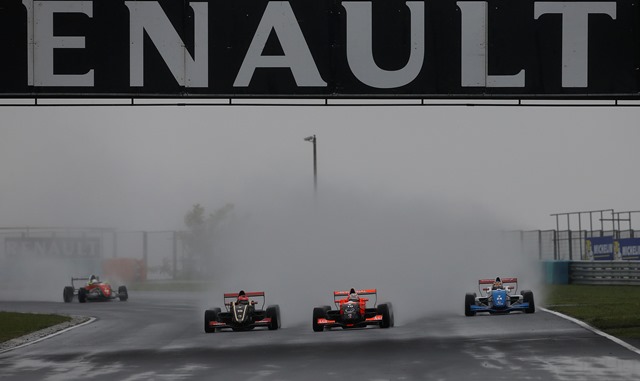 Gasly (centre) left Ocon, Rowland and co. in his spray in race one (Photo: Renault Sport/DPPI)

The Eurocup title scrap between Oliver Rowland and Pierre Gasly swung back and forth during the Hungaroring weekend. Gasly started the weekend in fine form, setting the pace in practice and taking pole in the dry on Friday evening. The race was held in the biblical conditions on Saturday but that made no difference to Gasly, who took an uncontested win that put him into the championship lead. On Sunday, Gasly missed out on topping his qualifying group by less than half a tenth but would have to start sixth, making up a place at the start of the race to finish fifth.

Rowland ran third in Saturday’s race until a wheel-to-wheel battle with Jake Dennis ended in disaster for the Racing Steps Foundation with the former running through the gravel and dropping to eighth by the flag. He bounced back with pole position on Sunday and although a sluggish start saw him have to settle for third place, that was enough to steal the championship lead away from Gasly by a single point.

Nyck de Vries was perhaps the star of the weekend, finally bringing his campaign to life after a difficult first half to the year with the Koiranen team. The pint-sized McLaren protege steered his way past the Rowland-Dennis clash to claim third in race one – his first Eurocup podium for a year – before lining up second on Sunday’s grid and out-launching Rowland, going on to set numerous fastest laps on his way to victory. While admitting he was strong at the Hungaroring last weekend, the former karting star told PaddockScout he was confident he could carry the pace onto the final two rounds.

Esteban Ocon finished second to fellow Frenchman Gasly on Saturday and took fourth on Sunday to sit as an outsider in the title race – 37 points behind Rowland. Lotus junior scheme stable-mate Oscar Tunjo took over fourth in the points with second place in Sunday’s race, while Dennis slipped to fifth as his search for a podium continues.

Next round: Paul Ricard, 28-29 September

Kirchhofer on top form as title is secured 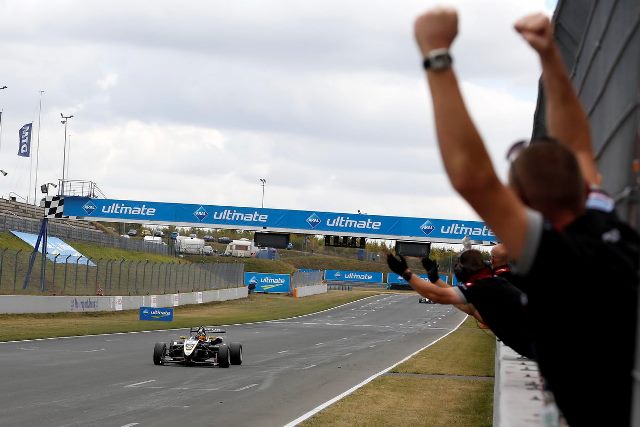 Kirchhofer took another two wins on the DTM weekend at Oschersleben (Photo: formel3.de)

Marvin Kirchhofer sealed his second title in two years of single-seaters in suitable style with a dominant win from pole position in race one at Oschersleben. Race three was a similar affair, and he only narrowly fell short of a perfect weekend by finishing second in race two behind Emil Bernstorff after starting back in eighth on the reverse grid.

With the title decided, the battle for second place between Kirchhofer’s Lotus team-mates Artem Markelov?and Bernstorff hotted up. In the previous seven weekends, Markelov had only twice finished off the podium but failed to reach the rostrum at all at Oschersleben. In both of the opening two races, the Russian ended an overtaking attempt in the turn one gravel trap. Fourth place in race three keeps him ten points ahead of Bernstorff. The Brit racked up his sixth win of the year in race two, but was only fourth and fifth in the other races.

Gustavo Menezes and John Bryant-Meisner capitalised on the Lotus pair’s inability to join Kirchhofer on the podium by finishing second third respectively in race one and switching positions in race three.

Next round: Hockenheim, 28-29 September 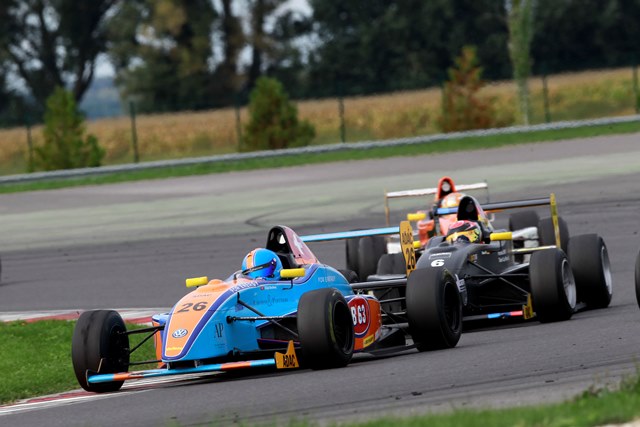 Rookies Boschung (26) and Dienst (6) backed up their promise with maiden wins (Photo: ADAC)

ADAC Formel Masters may have separated from German F3 to go and race at the Slovakia Ring last weekend, but their season continued in similar vein to the upper category with Alessio Picariello sealing his dominant championship success. He won race one and then sealed the deal with second in race two. In race three it had seemed he had finally claimed his first reverse-grid triumph of the year, only to have it stripped from him for braking suddenly as he took the chequered flag, resulting in a fourth non-score from seven race threes this season.

On the weekend of the Formula BMW Talent Cup final, it was fitting that two of last year’s graduates Marvin Dienst and Ralph Boschung notched up their maiden wins in ADAC Formel Masters. Dienst beat Picariello home in race two and finished second in the other two races, while Boschung inherited the race three win having narrowly avoided running into Picariello when he slammed the brakes on.

Report: Picariello closes in on title with Slovakia Ring victory

Next round: Hockenheim, 28-29 September 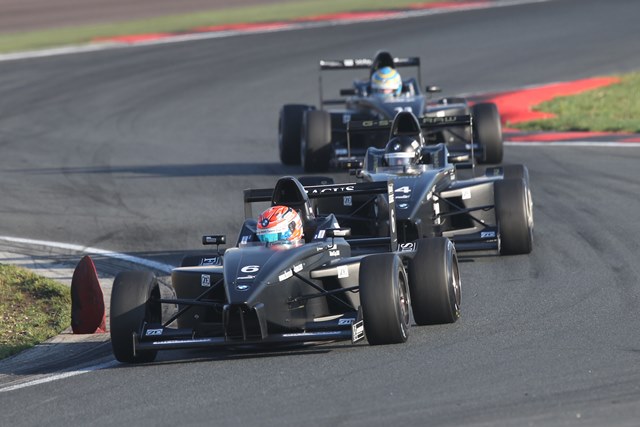 Hansson leads on his way to race one victory (Photo: BMW AG)

Robin Hansson starred in the Formula BMW Talent Cup final at Oschersleben to become the third winner of the competition. He won the first of the three races and finished second to Nico Menzel in race two to lead the German driver in the standings going into the deciding race. Hansson led when Menzel made contact trying to pass, finishing up in the gravel. Hansson finished seventh with a broken wing but that was enough to wrap up the title. Menzel finished second in the standings with eventual race three victor Michael Waldherr in third. 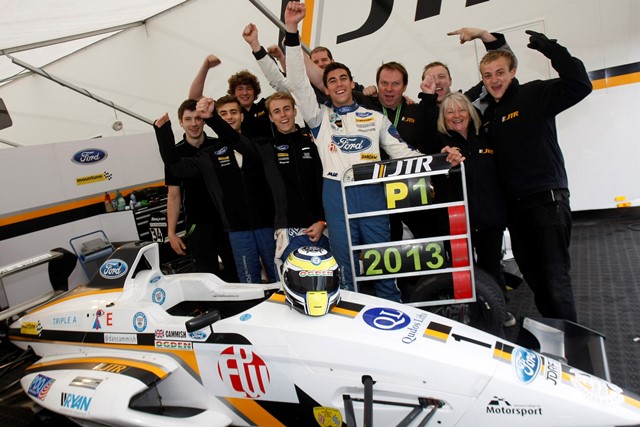 Dan Cammish finally secured the Formula Ford GB title at Rockingham and added another three race victories to depart the series with an unbeaten record of 24 wins from 24 races. Eyeing a professional career and exploring opportunities in the British Touring Car Championship, Cammish will move on and leave the door open for his rivals to win races during the final two weekends.

Sam Brabham, Jayde Kruger, Juan Rosso and Harrison Scott are amongst the leading contenders to claim a victory having all stood on the podium at Rockingham.

Report: Cammish closes out Rockingham round with another win

Next round: Silverstone, 28/29 September

Nandy closes up in title race with home treble

Akash Nandy won all three races on home soil at Sepang to move right into contention in the title race. Two third-places and a fourth were enough for Aidan Wright to double his points lead over Afiq Ikhwan from five to ten points. Ikhwan was second to Nandy in both race one and race two but retired from race three with a technical problem. Nandy’s results cut his gap to Wright from 44 to 21 points with one round remaining.

The German put in a suitably dominant performance at Oschersleben as he wrapped up the German F3 title. He looks more than capable of competing at the front in GP3 or European F3 next season.