Kevin Magnussen claimed his third pole position of the season in qualifying for Saturday’s first race at Silverstone. Rain fell as the race got underway, and leader Magnussen was caught out in the tricky conditions and crashed out of the lead. Eight cars then went off one after the other on standing water at Luffield, bringing out the red flags. Amongst those to go out included Alexander Rossi, title contender Sam Bird, Nico Muller, Marco Sorensen and Kevin Korjus.

While the remaining leaders had made the switch to wet tyres before the stoppage, Will Stevens had remained on slicks and taken the lead. Allowed an effectively free change to the wets, the Briton led after the restart but then made the same mistake as his Carlin teammate Magnussen and went off on his own at Stowe.

Jules Bianchi inherited the lead, and showed his talent to keep it on the tarmac to take a convincing win over the ever-impressive Robin Frijns. FR3.5 debutant Nigel Melker followed up his recent strong performances in wet GP2 races to claim a podium finish. Nick Yelloly and Antonio Felix da Costa completed the top five, with only nine finishers on the lead lap.

Bianchi then took pole for Sunday’s race, but dropped to fourth initially after a poor start. Sorensen led from the first corner and looked set to complete a comfortable win until suffering a puncture and going off the road with the clock having ticked down to zero. Bird inherited his second victory of the season to make up for his first race retirement with glory on home soil.

Frijns ran third behind Sorensen and Bird for much of the race, but found himself passed by Bianchi at Copse. Felix da Costa took advantage of the move ahead of him to dive down the inside of both of them and take third place – which became second at the end. Bianchi claimed the final podium spot in third, while Frijns fell all the way back to ninth by the flag. Arthur Pic took fourth ahead of Rossi, who recovered from the back of the grid after missing qualifying due to his first race damage. Stevens, Muller and Yelloly rounded out the top eight.

Frijns’ lead over Bird has been halved from ten points to five, while Bianchi’s double podium sees him just one point behind Bird. The three-way title fight resumes in three weeks’ time at the Hungaroring, with two weekends remaining after that. 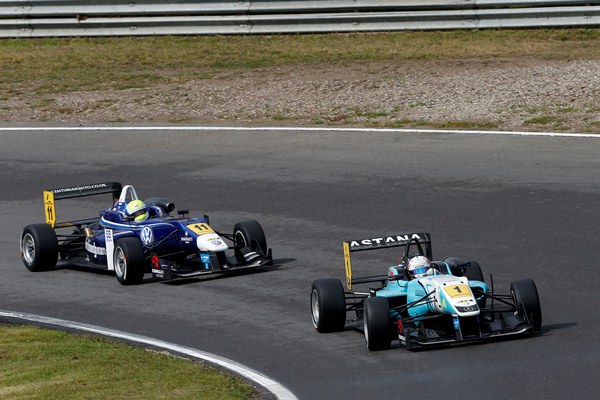 Felix Rosenqvist put a disappointing campaign thus-far behind him to get his first win of 2012 in the opening race at Zandvoort – the scene of his shock Masters race win last year. The Swede got the jump at the start on rookie pole-sitter Sven Muller, who finished second. Michael Lewis made the podium in third ahead of Raffaele Marciello, Tom Blomqvist, Daniel Juncadella, Pascal Wehrlein and Will Buller. Carlos Sainz Jr was only 11th after a penalty for a jump-start.

Buller started on pole for race two and would convert that into victory in a race that only saw three laps of racing. Prema teammates Lewis and Marciello came together at turn one, causing Marciello to run through the gravel and drop to last and Lewis to park up further round the lap. The safety car was scrambled for lap two, but rain caused the race to be red-flagged. The shower was only a quick one, but only four minutes remained on the clock when the race got going again – enough for two more racing laps. The positions didn’t change, meaning Buller got his second Euro Series win of the season ahead of Juncadella, Wehrlein, Blomqvist, Muller and Rosenqvist.

The weather was an important factor again in race three. The race started behind the safety car, and at the restart Marciello ran into leader and teammate Muller after the latter braked before crossing the line – seemingly fearful of passing the safety car as it entered the pits. The German will have a five-place grid penalty for the next race. The safety car came back out again, when a number of cars switched to slicks. Juncadella was leading at the restart having – despite the race starting under safety car – started with slicks on and took an easy win. Buller also started on slicks, but the Northern Irishman was initially passed by wet-shod F308 driver Sandro Zeller before the Swiss driver’s tyres went off. Wehrlein got past teammate Roseqnvist to complete the podium. Five cars went side-by-side down the pit straight as they tried to pass Zeller, which of course ended in disaster as Lewis and Blomqvist touched. Following another safety car intervention, Sainz finished fifth.

Juncadella’s victory extends his points lead to 25 points over Wehrlein, while Maricello has fallen to fourth behind Buller. Juncadella has also extended his lead in the FIA European F3 Championship. Two weekends remain, the first of which is Valencia on 29/30 September.

Mitchell Gilbert claimed victory in race one at Laustiz from pole position, 13 seconds ahead of points leader Jimmy Eriksson. Luca Stolz completed the podium ahead of Lucas Auer. Artem Markelov took his first F3 win in the reverse grid race two ahead of Rene Binder, Eriksson and Auer. Auer won race three ahead of Gilbert and Kimiya Sato, while Eriksson finished down in sixth. Eriksson continues to lead the points on 313 points, while Auer is up to second on on 227 ahead of Sato who spun in the first race. With 75 points available in a weekend and an 86 point lead, Eriksson should wrap the title up at the penultimate round at the Nurburgring on 15/16 September. 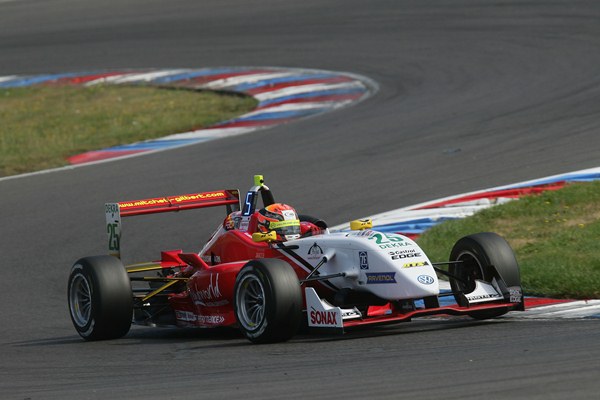 Having not finished in the top five all year up to this point, Hendrik Grapp took a shock pole position and victory in race one at Lausitz. Title contenders Gustav Malja and Marvin Kirchhofer completed the podium. After finishing fourth in race one, female ace Beitske Visser started race two from pole and claimed the second win of her rookie campaign in cars. Malja was second ahead of Alessio Picariello and Kirchhofer, but those latter two were both handed 30 second penalties for ignoring yellow flags dropping them to ninth and tenth. Race three saw Jeffrey Schmidt come from sixth on the grid to take his maiden win with front-row starter Felix Wieland in second and Malja coming home third. Malja’s triple podium extends his lead to 25 points over Kirchhofer, who was sixth in race three, with two rounds remaining.

The Formula Renault NEC headed to Spielberg for round five of eight. Josef Kaufmann brought all three of their cars, and third-year Formula Renault racer Alex Riberas found his form to win the first race ahead of teammate Stoffel Vandoorne and surprise pole-sitter Gabriel Casagrande. Points leader Jake Dennis was fourth ahead of Nyck de Vries and Pierre Gasly, while Dennis’ nearest rivals Jordan King and Josh Hill were 11th and seventh respectively.

Riberas was on pole for race two, but this time it was Vandoorne who would win ahead of Dennis and de Vries. Hill was fourth, Gasly fifth and Riberas falling to sixth. Dennis now has 255 points with King on 191 and Hill on 183. Next weekend sees a trip to Most in the Czech Republic. 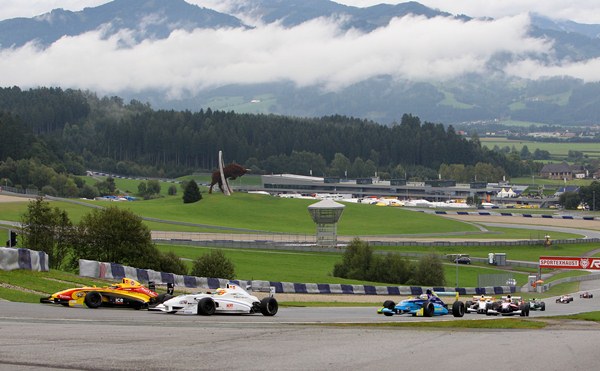 PaddockScout Driver of the Weekend: Very few contenders this weekend with nobody really having a perfect time, but we’ll give the honour to Jules Bianchi even if he would have had a double win without a poor start to race two.

Next weekend: GP2 and GP3 are back in action after the F1 summer break at Spa-Francorchamps – with the Belgian venue marking the penultimate weekend for the latter series.