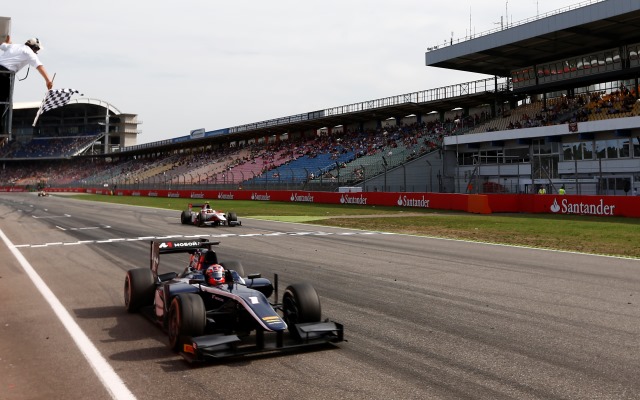 GP2 enjoyed thrilling 200th and 201st races in the championship’s history at the Hockenheim. Mitch Evans claimed his second straight feature race win as he charged from 15th on the grid, making the most of an unpopular option-prime tyre strategy to climb to the front of the pack and stay there. A fast start in wet conditions in the sprint race meant the Kiwi appeared to be on for a rare double when he took the lead on lap five, but he struggled after that and fell back to 11th. That meant he actually slipped from fourth to fifth in the standings over the course of the weekend.

Stoffel Vandoorne got the jump on pole-sitter Jolyon Palmer to lead much of the feature race, before rejoining from his late stop behind Evans. Second place still gave the McLaren junior his third podium from as many feature races. He led again on Sunday after taking the lead from Evans, and stayed there despite needing to pit for slicks as the track dried. He wasn’t immediately comfortable on those though, and slipped to third. The Belgian’s double podium – the first time he’s scored points in both races in GP2 – brings him back up to sixth in the standings, only 14 off third.

Palmer was third in the feature race and sixth in the sprint, but his pole position helped him to extend his points advantage from 38 to 41. Nearest rival Felipe Nasr was fifth in the feature race and then second in the sprint race, both times losing out to Stefano Coletti. After his third straight feature race fourth-place, he bettered his sprint race second places from Austria and Silverstone for a win – his first for over a year – after surviving on slicks in the early wet running. Coletti is up to fourth in the standings, just four points behind Johnny Cecotto, who was seventh in race one and then retired from the sprint after a number of moments in the wet.

Marco Sorensen shadowed Vandoorne for the entire sprint race, with fourth place being the Lotus F1 reserve’s fourth points score from as many starts in GP2. As at Silverstone, Raffaele Marciello showed impressive pace but had his weekend ruined by poor luck. After being impeded twice in qualifying, his car stalled during his feature race pit stop due to high temperatures. The same happened at exactly the same moment for Arthur Pic, who together with Marciello had been running ahead of Evans at the time on the same strategy. Marciello was third behind Vandoorne and Sorensen in the sprint when he became stuck in sixth gear. 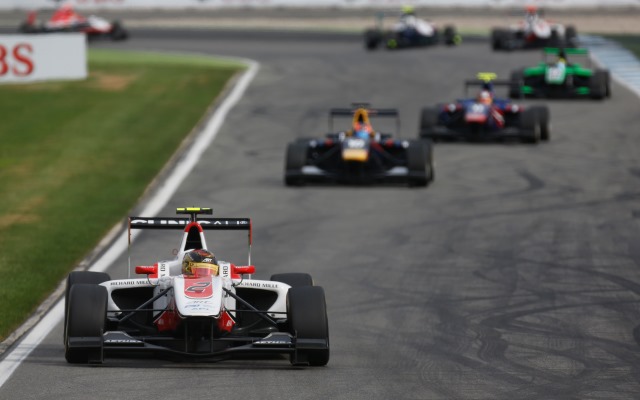 Having won back-to-back national titles in Germany, Marvin Kirchhofer made the most of home advantage to claim his first European-level in the first GP3 race at Hockenheim, leading from pole position the chequered flag. Unfortunately, the ART man ended his weekend on a low by Emil Bernstorff in race two, putting both out of the race and picking up a five-place grid penalty for Hungary.

Also getting his first win in a major single-seater series was Jann Mardenborough. Arden continued to struggle for dry qualifying pace but Mardenborough once again made good progress in race one, going from 13th to eighth. In race two he made a great start from reverse grid pole, withstood early pressure and then pulled away.

Alex Lynn finished second to Kirchhofer in race one and then banished his Sunday morning demons to come through to third from seventh on the grid. Rival Jimmy Eriksson had initially kept the Red Bull Junior at bay to take the final podium spot but was later relegated to 15th for not slowing for yellow flags. Starting the weekend with a grid penalty carried over from Silverstone, he finished seventh in race one but couldn’t capitalise on a front row start for race two. He is now 30 points in arrears of Lynn, and only four ahead of Kirchhofer.

British drivers completed the top six behind Kirchhofer on Saturday, and filled the top five places in Sunday’s final results. Bernstorff was third in race one ahead of Nick Yelloly, Dean Stoneman?and Dino Zamparelli. The latter was second on Sunday, followed by Lynn, Stoneman and Yelloly. Richie Stanaway dropped behind Kirchhofer and Bernstorff in the title race – damage dropping him to 13th in race one before recovering to seventh in race two. 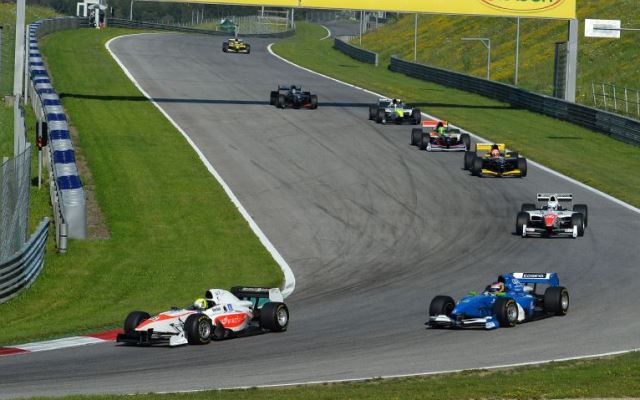 The Japanese driver took a comfortable pole position in qualifying and, despite losing two places at the start of race one, ended up fighting back to the lead to secure his fifth win of the season. His weekend was then somewhat sullied by a suspension failure in race two, but he continues to enjoy a healthy lead in the standings.

Spielberg marked a very good round for Virtuosi Racing, who had both cars on the podium in both races of the round. Team newcomer Tamas Pal Kiss narrowly lost out to Sato in race one and claimed another second place in the following reverse-grid race. Meanwhile, Andrea Roda took third in the first race and then powered through to a maiden Auto GP win in race two.

Super Nova team leader Markus Pommer was plagued by technical issues all weekend, having had to sit out the second qualifying session and then retiring early on in race two. His teammate Michela Cerruti, meanwhile, bagged her third podium in the series.

Finally, another series frontrunner – FMS Racing’s Kevin Giovesi – looked well on his way to taking the win in the reverse-grid race after fourth in race one. However, the newly-appointed Caterham junior had a dreadfully slow mandatory pit-stop and then had a wheel come off on the outlap.

Euroformula Open: Stuvik back to the lead with Silverstone double 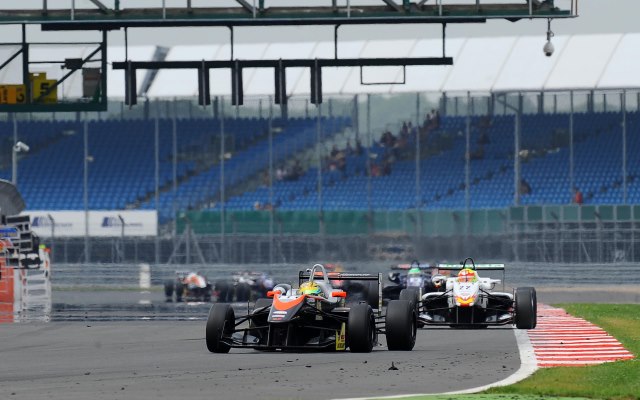 After a torrid time at the Hungaroring, Euroformula Open 2013 runner-up Sandy Stuvik was back to winning ways at Silverstone, reclaiming the lead in the championship in the process. The Thai racer converted a front row start into a victory on Saturday and then dominated on Sunday, winning the race from pole despite initially losing the lead over the opening lap.

His teammate and championship rival Artur Janosz struggled for pace at the British track and was forced into a weekend of damage limitation as he took two fifth-place finishes. Meanwhile, another title contender – Spanish wonderkid Alex Palou – ran very close to Stuvik in both races and left the weekend with two second places and moved into P2 in the points standings.

Team West-Tec’s new leader Yarin Stern had a solid Silvestone outing, rounding out the podium on both occasions. Meanwhile, Japanese racer Yu Kanamaru – who sits best of the rest in the standings behind the three title contenders – managed a pair of fourth-place results.

BRDC F4: Lanan trio get a win each at Oulton Park 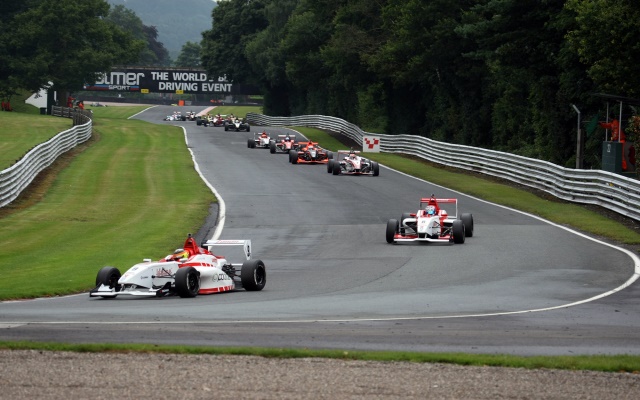 The fourth round of the BRDC F4 championship at Oulton Park was kind to those racing under the banners of reigning champions Lanan Racing, with all three of their F4 drivers going home with a new victory trophy in each of their respective collections.

Championship leader George Russell had a truly spectacular start to his Oulton Park weekend as he topped qualifying with ease and proceeded to run laps around the field in the opening race. However, he could only make his way up to sixth in the reverse-grid race and then ended up crashing out with points rival Raoul Hyman, who up to that point scored two podiums in two races, in race three.

Indian rookie Arjun Maini was the top Lanan man in the reverse-grid race two, mastering the wet conditions to claim a confident victory. Finally, another Lanan driver Struan Moore converted his fastest-lap-based race three pole into a win of his own, which was preceded by two fourth-place finishes, making him the top points-scorer of the round.

HHC’s Will Palmer, who emerged as a championship contender with two victories at Snetterton, claimed podiums in the second and third race at Oulton Park and now equals teammate Hyman on points. However, he was only the third most successful driver of the round, pipped by MGR’s Chris Middlehurst, who claimed three top-five finishes and made two visits to the podium. 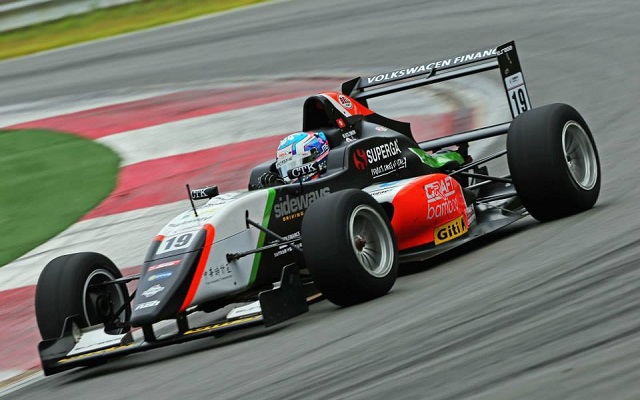 Solomon had a good shot of becoming the season’s second winner in race six, but made a slow start from pole and was passed by Munro, who claimed his sixth consecutive victory and made up a KCMG 1-2 with teammate Dan Wells.

The Hong Kong driver then started alongside Munro for the seventh race and managed to hold on to his maiden victory in the series after a better getaway off the line.

He would get another win in in race three after Munro and Wells both made jump starts off the line and then came together, with the Kiwi retiring on the spot and the Brit picking up a sizeable post-race penalty.

With the KCMG pair out of the way, Andersen Martono of Meritus and Darma Hutomo of Humpuss secured their first podiums in second and third respectively.

Local Formula Renault racer Guillermo Rey took his second victory in the Argentinian series in the nation’s capital Buenos Aires, winning the Saturday race after topping free practice and qualifying. Emiliano Marino and Agustin Lima completed the podium, while Manuel Mallo and Felipe Schmauk made up the rest of the top five.

Championship leader Federico Cavagnero did not finish the race, whilst his closest rival Miguel Calamari took sixth, cutting the gap down to 20 points.

The Sunday race was called off amidst the near-cancellation of the headlining Super TC2000 event.

Lanan Racing’s F3 Cup protege Toby Sowery did not let the team down amidst a clean sweep weekend for the squad.

Sowery added two F3 Cup victories to the three BRDC F4 successes of the team, winning both races by near ten seconds each.

Sowery’s nearest points rival Tristan Cliffe was second in both races, but now trails the youngster by a whopping 60 points with six races to go. 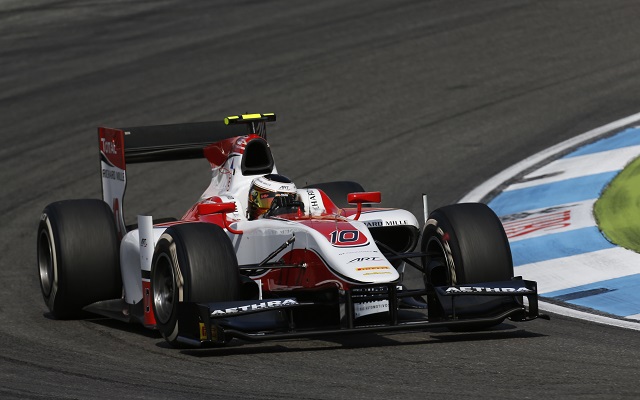 Some might rightfully say that the Belgian should’ve won at least one of the two Hockenheim races, but, in a thrilling weekend of changing conditions and varying tactics, it was only Vandoorne who impressively made the podium in both the tactics-heavy race one and the wet-dry race two.

With four podiums in the last six races, it seems McLaren’s young star is finally getting to grips with the GP2 series.