German F3: Pommer takes title and yet another double win 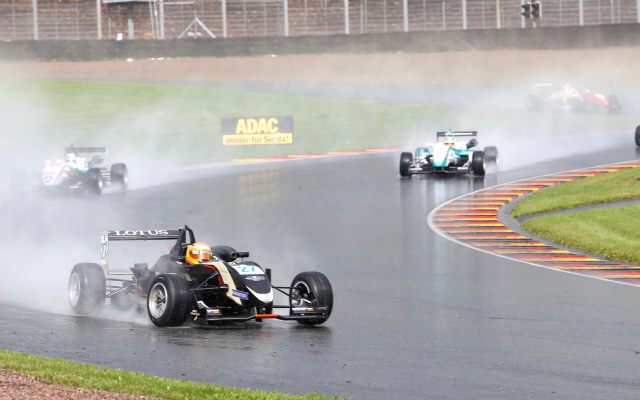 Markus Pommer secured his German F3 Cup crown as he showed he was the class of the field again at a moist penultimate event at the Sachsenring. Victory in a sodden first race was enough to guarantee the title, and the 23-year-old followed that with third in the reverse grid race two and then another win in race three, meaning he has taken a double win in six of the seven weekends run so far.

Sam MacLeod enjoyed a strong weekend that saw him climb to third in the standings, in firing distance of P2. The Briton was only sixth in race one after an off while running second, but capitalised on starting third for race two to score his third win of the campaign. He started on pole ahead of Pommer for race three, but would have to settle for second.

34 points ahead of MacLeod is Nabil Jeffri. The Malaysian benefited from MacLeod’s error to take second in race one, and was then fifth and eighth in the later races. Indy Dontje dropped to three points behind MacLeod after taking fourth place in the two main races, and seventh in the other.

McLeod’s Van Amersfoort Racing team-mate Weiron Tan enjoyed by far his best weekend yet in the series, taking his first three podiums. The Malaysian, who left the Caterham F1 setup after compatriot Tony Fernandes sold up, took a third, a second and a third. Macau Grand Prix podium finisher Pipo Derani returned to the series with ADM and scored a best result of fifth. 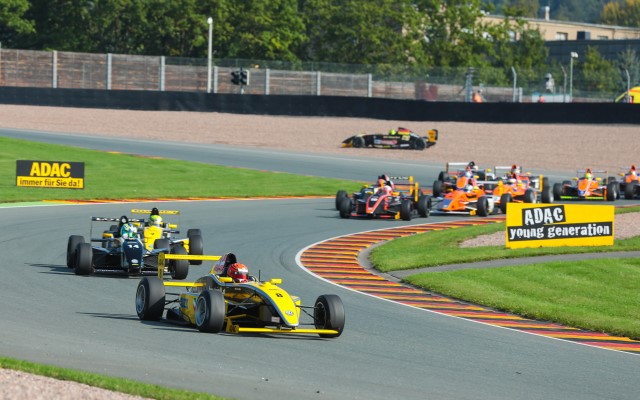 For a lot of what Pommer has done in German F3 this year, Mikkel Jensen has done the same in ADAC Formel Masters, and that includes wrapping up the title on Saturday at the Sachsenring and winning two more races. The Danish driver won the weekend’s opening two races from pole, with the second of those wins enough to become the seventh and last champion in the series ahead of the switch to F4 next year. Jensen completed his weekend with fourth in the reverse grid race.

Mucke duo Maximilian Gunther and Marvin Dienst took the consolation of a one-two finish in race three at the end of a low-key weekend, with Gunther fifth and eighth and Dienst ninth and sixth in the earlier races. But Jensen’s Neuhauer team-mate Tim Zimmermann was able to overhaul Dienst for third in the standings thanks to third-place finishes in races one and two, followed by fifth in race three.

Joel Eriksson, younger brother of GP3’s Jimmy, enjoyed a strong weekend and climbed to fifth in the standings courtesy of a second and a fourth in the main races, followed by tenth, enabling him to jump Motopark team-mate Ralph Boschung who managed no better than eighth. Igor Walilko was also impressive, taking fourth, second and third. 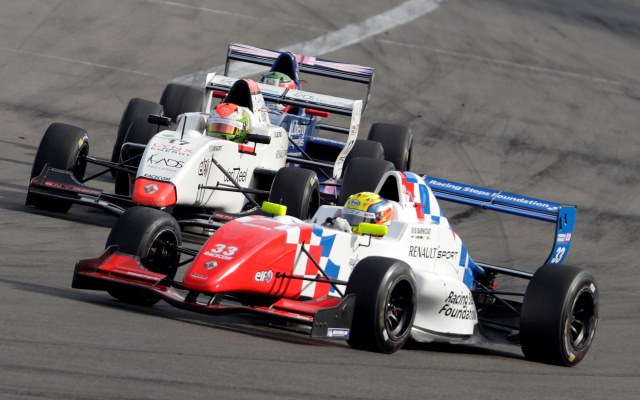 Ben Barnicoat claimed the Formula Renault 2.0 NEC title in his first season of single-seater racing after beating his rivals in a final weekend at the Nurburgring that was extended and then shortened. In the first race – arranged following a postmonement from the previous round at Most – Barnicoat passed his chief rival Louis Deletraz to finish fourth, and repeated that in race two to further stretch his championship lead. He was due to start back in 15th for the final race, but heavy fog early on Sunday morning caused that to be cancelled and the season ended early.

Andrea Pizzitola won the opening race from pole position and took third in race two, but was denied the chance to start from pole in race three. Gustav Malja was the victor in race two after passing surprise pole-sitter Josef Zaruba at the start, allowing the Swede to take fifth place in the final standings.

Seb Morris was second to Pizzitola in the opening race, and then beat Steijn Schothorst to sixth in race two to tie on points with the Dutchman and take third place – and the last of the prize FR3.5 tests on offer – on countback, with two wins to Schothorst’s one. 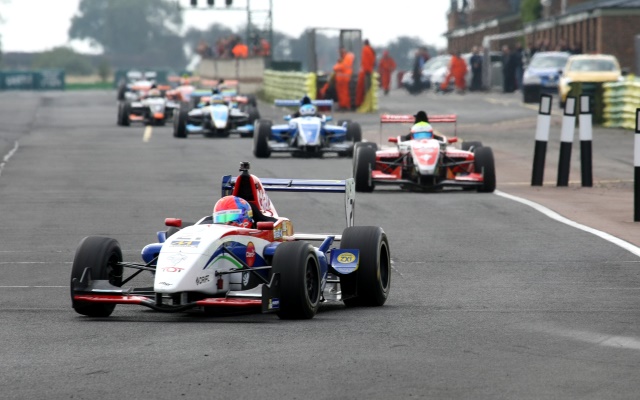 Pietro Fittipaldi saw his eight-race winning streak in Protyre Formula Renault come to an end in the opening race at Croft, but his tenth win from 13 races in race two was enough to wrap up the title in advance of the final round. The Brazilian was beaten to pole for the two races by his nearest rivals Matteo Ferrer and Alex Gill, but fast starts got him into the lead each time.

However, a misjudged move from team-mate Colin Noble allowed Piers Hickin to nip through and score his first win. Fittipaldi took second, and in the later race was allowed to take a dominant victory ahead of Gill and Hickin. Poor starts cost Ferrer and restricted him to third and fifth in the two races, while Gill was fourth and second.

Just seven points split Ferrer, Gill and Hickin in the fight for second going to the Silverstone season finale next weekend. 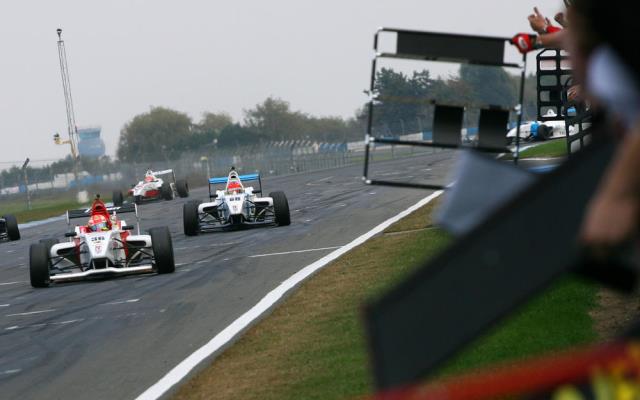 Arjun Maini will take a 21-point advantage into the BRDC F4 title decider after George Russell and Raoul Hyman clashed fighting over the race three lead at Donington, handing Maini the win and the championship lead. Russell had finished second and sixth in the opening races, and was leading race three from pole when he and Hyman made contact – for the second time this season – sending both into retirement.

Maini had finished fourth in the weekend’s first two races, and was running fifth in race three until being presented with victory by contact ahead of him between Sennan Fielding and Will Palmer and then Russell and Hyman. Before that point, Hyman had finished down in seventh in race one but brought himself back into contention with victory in race two, but he has now slipped to fourth in the points behind Fielding, who won race one, was seventh in race two and made it home in ninth in race three.

Palmer had kept himself in contention with fifth in race one and then second in race two, but was forced to retire from race three after his contact with team-mate Fielding. Struan Moore is the sixth driver who can mathematically win the title after a third, a fifth and a tenth. Also on the podium during the weekend were Diego Menchaca and Jordan Albert.

Joonas Lappalainen secured the Formula Renault 1.6 Nordic title with a fourth and a fifth at the Mantorp Park finale as Ralf Aron scored his second consecutive double victory.

Aron was dominant in race one from pole, with Oliver Soderstrom and Lukas Sundahl completing the podium. In race two, Ilmari Korpivaara and Pontus Fredricsson were second and third. 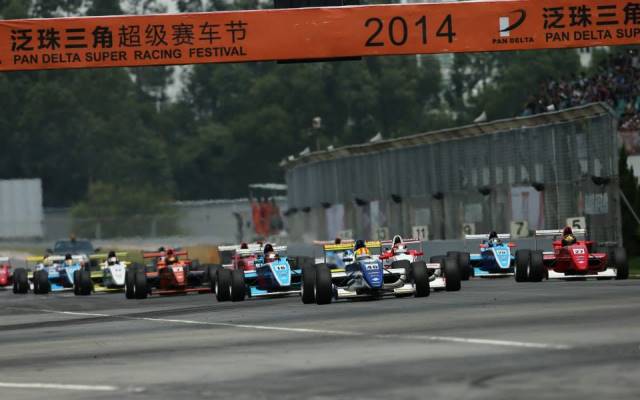 James Munro, Jake Parsons, Matthew Solomon and Dan Wells all took a win each in an extended Formula Masters China weekend at Zhuhai. Although Munro started his weekend well, the rest of it would be far from straightforward, suffering a retirement, a 13th and a seventh after two collisions and an off.

That’s reduced his championship lead to just six points over Solomon, who was a first lap retirement in race one, made contact with Munro in race two, took victory in race three and then third in race four.

Relegated from first to 11th in race one for jumping the start, Parsons came through to win race two from fifth on the grid, was second to Solomon in race three and then sixth in race three, having started from the back as a result of not being present at the earlier Zhuhai round, from which that race had been postponed. Wells was another race one retiree, following that with fifth and third before his first win of 2014.

Pommer matched his most dominant set of three results in German F3 at the Sachsenring with wins in the two main races and a third place in the reverse grid race. That was despite having the initial pressure of needing to wrap up the title, and despite some challenging weather conditions. 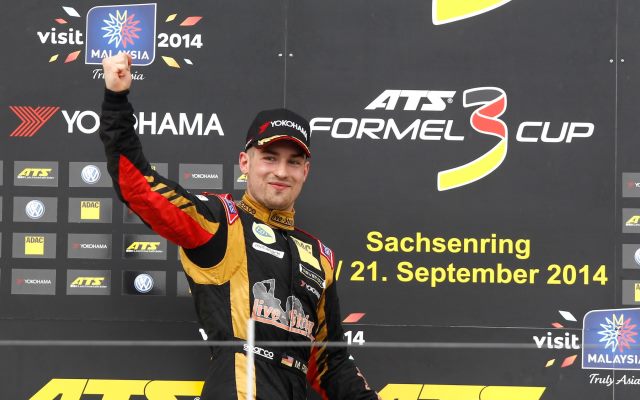