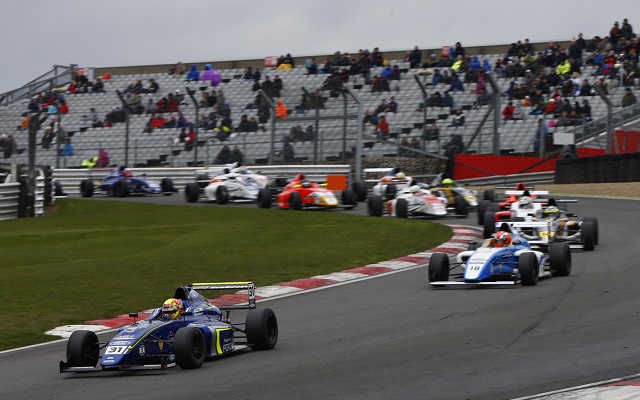 World karting champion?Lando Norris began his single-seater career with a double victory at Brands Hatch in the first ever round of MSA Formula, the British FIA F4-rules series, but has been provisionally stripped of the second of those wins.

Carlin driver Norris, entering his second season in cars after a year in Ginetta Juniors, won the opening race on Saturday from second on the grid, and claimed the honours in Sunday’s final race from behind after a poor start from pole. It is alleged however that he passed under safety car, leading to him being excluded and dropping him from first to fifth in the points. Carlin have appealed the decision.

Fellow karting graduate Dan Ticktum enjoyed an impressive maiden weekend in car racing, racing well to finish second in the first two races and fourth in the last, giving him the championship lead. Ricky Collard collected his first win in cars in race two from fourth on the grid, immediately before father Rob won the opening round of the British Touring Car Championship. Ex-FFord racer Collard Jr was fifth in the weekend’s other races.

After finishing eighth from third on the grid in race one, James Pull went on to finish third in race two from pole and then lead Norris in the finale before being relegated to second – only to provisionally inherit the win. Matheus Leist – second in Brazil F3’s B-class last year – took home a P3 and a P2 from his first European race weekend and was eighth in race two. Late entrant?Jack Barlow inherits a podium in race three, recovering from first-lap contact in race one. Peter Allen

BRDC F4: Palmer is early leader after sharing wins with Mealin and Albert 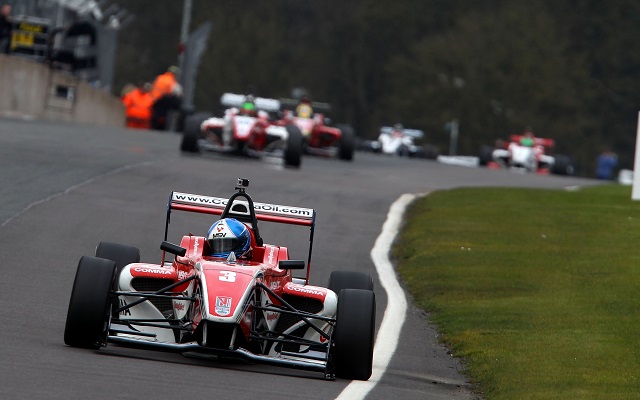 As the only race-winning returnee from 2014’s regular season, Will Palmer entered this new BRDC F4 campaign as the title favorite and has lived up to expectations by leading the points after the first round at Oulton Park.

In qualifying, Palmer prevailed in a close fight against HHC teammate Harrison Newey and had little trouble converting that maiden pole into a race one victory. Newey completed an HHC 1-2, while Sebastian Lanzetti took third on his debut with Hillspeed.

After race two’s reverse-grid poleman Sisa Ngebulana went off on the formation lap, Lanan’s Chris Mealin assumed the lead and made the most of the opportunity, taking the win. Ciaran Haggerty was a close second, with Palmer fighting through to third.

After a very tough time in the first two races, Jordan Albert brought Sean Walkinshaw Racing back onto the top step of the podium in the weekend’s final event, with Lanan duo of Mealin and Rodrigo Fonseca completing the top three. Valentin Khorounzhiy

Japanese F4: Makino makes it a double at opening round

The first round of the newly-established Japanese F4 category attracted a sizable grid of 28 cars, yet one driver managed to control the proceedings at Okayama despite all the competition.

Tadasuke Makino was quickest for most of the practice running, but a mixed conditions qualifying saw him on the third row for both races. However, he powered through to win the opener, before getting to watch his rivals eliminate themselves in the wet second race, handing him another win.

Shou Tsuboi was second in both races, while Yuya Hiraki and Hiroki Ohtsu picked up third-place finishes.

2012 Formula Abarth champion Nicolas Costa made it up to fourth in the first race but was denied a sixth-place follow-up by a penalty for passing under yellows.

Reigning FMCS title holder James Munro was taken out in the opener, but kept cool for race two, storming from 14th on the grid to fourth.?Valentin Khorounzhiy

There were drivers on the grid with bigger reputations, but Ticktum made good on his pre-season promise to score well in all three races and take an early championship lead. His result in a damp qualifying wasn’t optimal, but his race pace allowed him to make up ground each time. 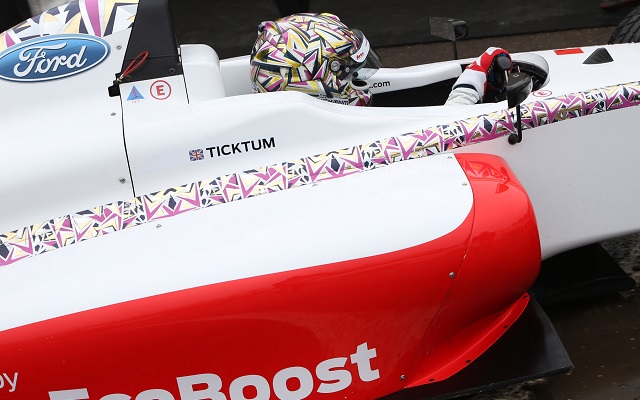