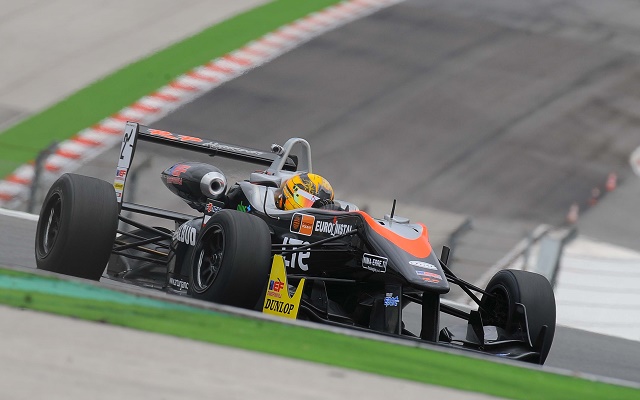 In 2013, at the age of 19, then-unknown Artur Janosz signed up with Campos Racing to race in European F3 Open. The Pole definitely needed some time to adapt to the car but there was promise in his late-season stint, as he scored points on three occasions.

Still, as a relative single-seater novice, he wasn’t really expected to be a frontrunner any time soon, despite having signed on with reigning teams’ champions RP for 2014.

Yet Janosz was clearly ready to take it to another level. He started the season well, with a fourth and second place at the Nurburgring but that was just the beginning.

Taking advantage of experienced teammate Sandy Stuvik?s car issues, he scored his maiden victory at Portimao and then took the lead in the championship after finishing race two in second.

After finishing runner-up again at Jerez, he took pole for race two and was set to win once more when he was forced to serve a drive-through for driving standards. But the Pole wasn’t fazed, with a victory and a second place at the Hungaroring next time around, as he retook the points lead he lost at Jerez.

His title challenge ran out of steam at Silverstone as he couldn?t do better than fifth in both races. Tyre gambling left him 15th in the first race at Spa-Francorchamps, but then he collected three second places in a row, yielding only to the unbeatable Stuvik.

In the season finale at Catalunya, he narrowly kept runner-up in the standings from Spanish wonderkid Palou, making it an RP Motorsport 1-2 and helping the squad wrap up another teams’ title.

If 2013 runner-up Stuvik hadn?t returned for a second year, Janosz could very well have been the champion but he probably isn’t heartbroken about finishing second in his sophomore season in cars.

Truly, 2014 was a superb year for Janosz and if he keeps learning as fast as he did in Euroformula Open, he can be really successful wherever he goes.