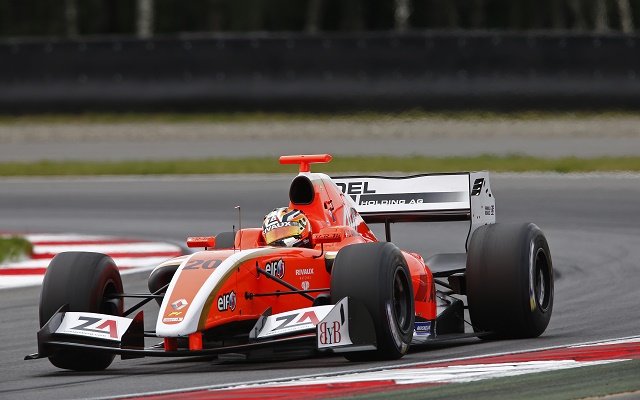 But his forays to higher levels in junior single-seaters have not done much good for his reputation. Generally resigned to racing with backmarker teams, he scored no points in his debut GP3 season in 2011, while two subsequent years in FR3.5 yielded only two top-ten finishes.

For 2014, he continued in 3.5, leaving Pons Racing for AVF. And the move immediately started paying off ? as, on occasions during testing, Amberg looked capable of competing at the front.

With AVF picking the talented, but extremely inexperienced Beitske Visser as his teammate, it was clear Amberg would have to lead the team, frequently banking points.

The Swiss driver did exactly that over the first three rounds, getting as high up as seventh in the standings due to consistent finishing.

At Moscow, he qualified a career-best third and, when Gasly stalled ahead, it was up to the Swiss driver to challenge local hero Sirotkin. And, surprisingly, he seemed up to the task, giving the Fortec man no breathing room for the entire duration of the race.

Were this any other track or any other category, Amberg would’ve stood on the top step, but despite superior pace, he just could not find a way past.

Unfortunately for the Swiss driver, that was about it for the season ? after Moscow, he struggled for pace and would only add a meager 12 points to his tally, frequently outperformed by his rookie teammate.

Still, it wasn’t enough to ruin a season of clear progress, which has elevated Amberg from the status of a perennial 3.5 backmarker.

What now for him? Well, a fourth season in the series would be pushing it and rumour has it that he’s looking for a seat in GP2. It’s not an easy championship to switch to, but, after 2014, he might very well spring a surprise or two.