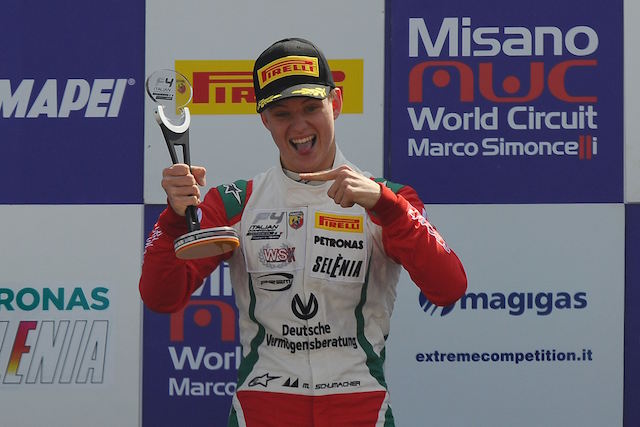 Mick Schumacher started his season in the best way possible with victory in the first qualifing race of the 2016 Italian Formula 4 season at Misano.

The first qualifying race was held among the A and B groups from the combined qualifying results, with two more races yet to come – one between groups B and C and a third between groups A and C, to ultimately decide the 36-strong grid for the final race. All races will give the usual points for the championship.

Schumacher had a good start from second on the grid, but it wasn’t enough to give him the lead. He would however, require just four more laps to get past polesitter Marcos Siebert, and would have a comfortable race thereon to win.

Behind them, there was an incident at the start between Marino Sato, Ian Rodriguez and Fabio Scherer, which forced Sato to retire, while Rodriguez and Scherer dropped to the back of the field.

Siebert, struggling with an ill-handling car, made a mistake on lap seven that dropped him to fourth behind Raul Guzman and Juan Manuel Correa, the Mexican and the American finishing in second and third.

Siebert had to settle for fifth after another setup-induced error cost him fourth to Simone Cunati, the Italian climbing from eleventh on the grid. Joao Vieira finished right behind the Argentine in sixth.

Juri Vips made it three Prema cars in the top ten with a strong drive to seventh after a slow start shuffled him down to 15th on lap one. Kush Maini was another driver with a burn from the stern, taking eighth after starting 21st.

Thomas Preining was up to fifth early on, but struggled for pace for the entire race, dropping out of top ten on the last lap, after being passed by Federico Iribarne and Kevin Kratz for ninth and tenth at the end.