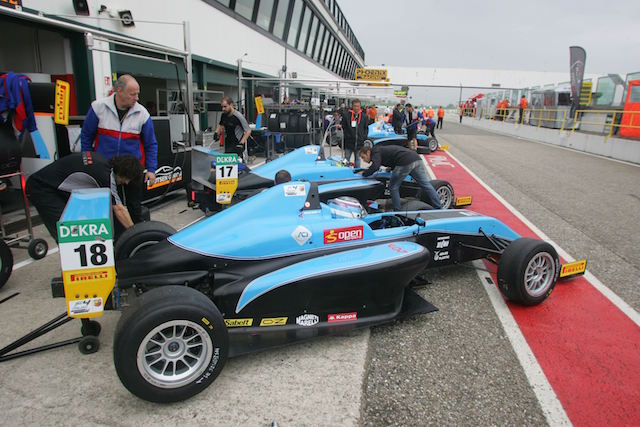 Marcos Siebert?and Mick?Schumacher?starred in the first two qualifying sessions of the 2016 Italian Formula 4 season at a wet Misano.

Guatemalan rookie Rodriguez was set for a big improvement near the end of the session, but triggered a red flag with a spin into the gravel.

Diego Bertonelli of RB Racing was third quickest ahead of fellow sophomores Marino Sato and Raul Guzman. Frenchman Valentin Hasse-Clot was sixth, beating Fabio Scherer, Simon Cunati and Mauricio Baiz. Jenzer’s Diego Ciantini made it into the top ten at the end of the session.

The second group were much more closely-matched at the front, with only a mammoth late effort from Jenzer driver Marcos Siebert securing him top spot ahead of his new?teammate Job van Uitert, who failed to improve after dominating most of the session. Siebert’s time was half a second faster than Schumacher’s.

Not far behind the top two were Prema duo Juan Manuel Correa and Juri Vips. Yan Leon Shlom was fifth?quickest despite missing a chunk of?the session, ahead of Thomas Preining and Joao Vieira.

Chinese driver Ye Yifei and Italian racer Giuliano Raucci were eighth and ninth fastest, with Kevin Kratz making it three Jenzer cars in the top ten in the second session.

As the quickest in qualifying, Siebert is set to head Group A with Schumacher leading Group B and van Uitert topping Group C, with Rodriguez, Correa and Bertonelli going into A, B and C respectively. The first race is set to be Group A versus Group B, making Sibert, Schumacher, Rodriguez and Correa the top four on the grid. The other races will see Group B take on Group C, and Group C face Group A, before the best 36 cars advance to the final.