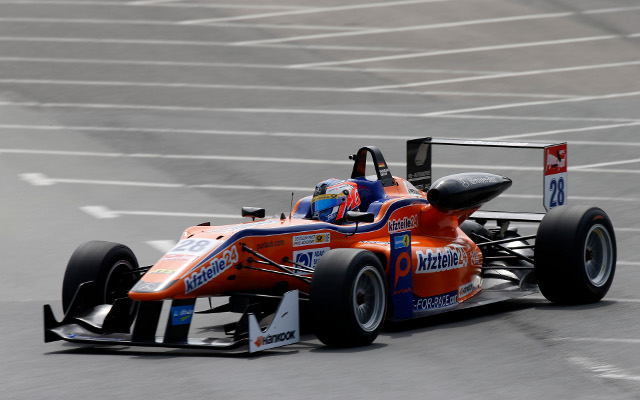 Maximilian Gunther collected his maiden victory in a second FIA F3 European Championship race at the Norisring that saw four safety cars and a thrilling climax.

Gunther moved from fourth to first in one corner after the final restart when Charles Leclerc, George Russell and Alex Albon all went wide ahead of him.

It was Albon who started from pole position but he was beaten off the line by fellow front-row starter Russell.

Albon reclaimed the initiative at the start of the second lap but ran deep at the first corner, allowing Russell to lead again but only for a lap, as he made a similar error one lap later to let Albon ahead.

After the first safety car interruption – where Ryan Tveter made contact with Arjun Maini – Albon built up a 1.6-second lead over Russell, but that was annulled when Michele Beretta was tipped into roll at Turn 1 by Matt Solomon.

The Italian was quickly out of his car and walking away despite the top of his car being slammed into the concrete wall on the exit of the corner.

The third safety car period followed quickly for an incident that eliminated three of the cars in the top six.

Points leader Charles Leclerc was scrapping with double Spa winner Jake Dennis over third, with the Monegasque driver taking the place at the second attempt at Turn 1.

In doing so he forced Dennis wide, and as the Briton returned to the racing line he was collected by Antonio Giovinazzi and Santino Ferrucci who were having their own collision, triggered by a seemingly ambitious manoeuvre from the American.

Dennis and Ferrucci were out on the spot, while Giovinazzi had to pit for a new front wing. With Felix Rosenqvist having already served a drive-through penalty for being out of position at the start, Leclerc’s three title rivals were now all out of the points.

The final interruption came when Pietro Fittipaldi spun and left Kang Ling with nowhere to go.

With less than five minutes left at the restart, Albon led Russell and Leclerc but lost the lead to his fellow Briton at the chicane in the middle of the lap.

Leclerc too passed Albon at the final corner, and then went down the inside of Russell for the lead at Turn 1. He forced himself and Russell wide, prompting Albon to attempt to pass them both only to run wide himself.

This delayed all three drivers and presented Gunther – who had started 12th – with the lead on a plate.

The German rookie held on up front until the chequered flag, while Albon took second ahead of Leclerc.

Russell was pushed down to fifth before the finish by Lance Stroll, who put his recent dramas behind him to match his best ever finish.

Mikkel Jensen – who ran ahead of Mucke team-mates Ferrucci and Gunther in a fight for seventh very early on before losing ground by running deep at Turn 1 – took sixth in front of Gustavo Menezes, Dorian Boccolacci, Alessio Lorandi and Brandon Maisano.

Rosenqvist finished 17th and Giovinazzi 22nd, giving Leclerc a 54.5-point lead over the Swede in the standings.