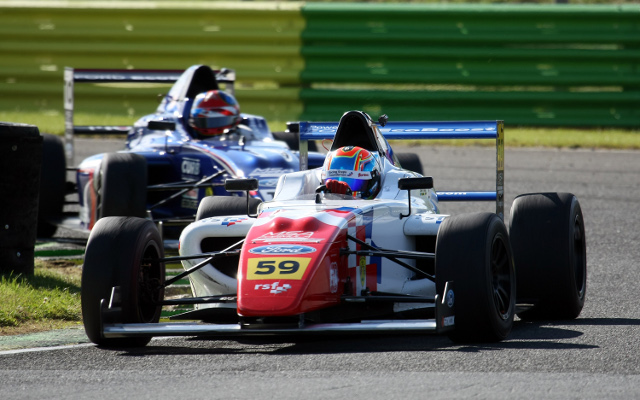 Smith, who is supported by the Racing Steps Foundation, started from pole after taking eighth in race one and the Fortec driver?confidently kept that position until the checkered flag.

Fellow front-row starter?Colton Herta?also maintained his place in the order, but had to face pressure from Louise Richardson towards the end.

Richardson, similarly to Smith, also celebrated her maiden podium finish in the series after stealing third from Matheus Leist?at?the start.

The Brazilian was unable to counter attack and spent most of the race in fourth. Moreover, he dropped another place as Sennan Fielding made a move on him in the dying minutes.

Tarun Reddy secured sixth, having to keep race one winner Daniel Ticktum at bay, and they were closely followed by Arden duo Sandy Mitchell and Enaam Ahmed.

Title contenders Ricky Collard and Lando Norris both had to recover from the lower?positions and finished only 12th and 13th respectively. Collard was seventh on the grid?but was forced start from the pitlane, while Norris lined up 17th as a result of a last-corner incident with Ticktum in race one.