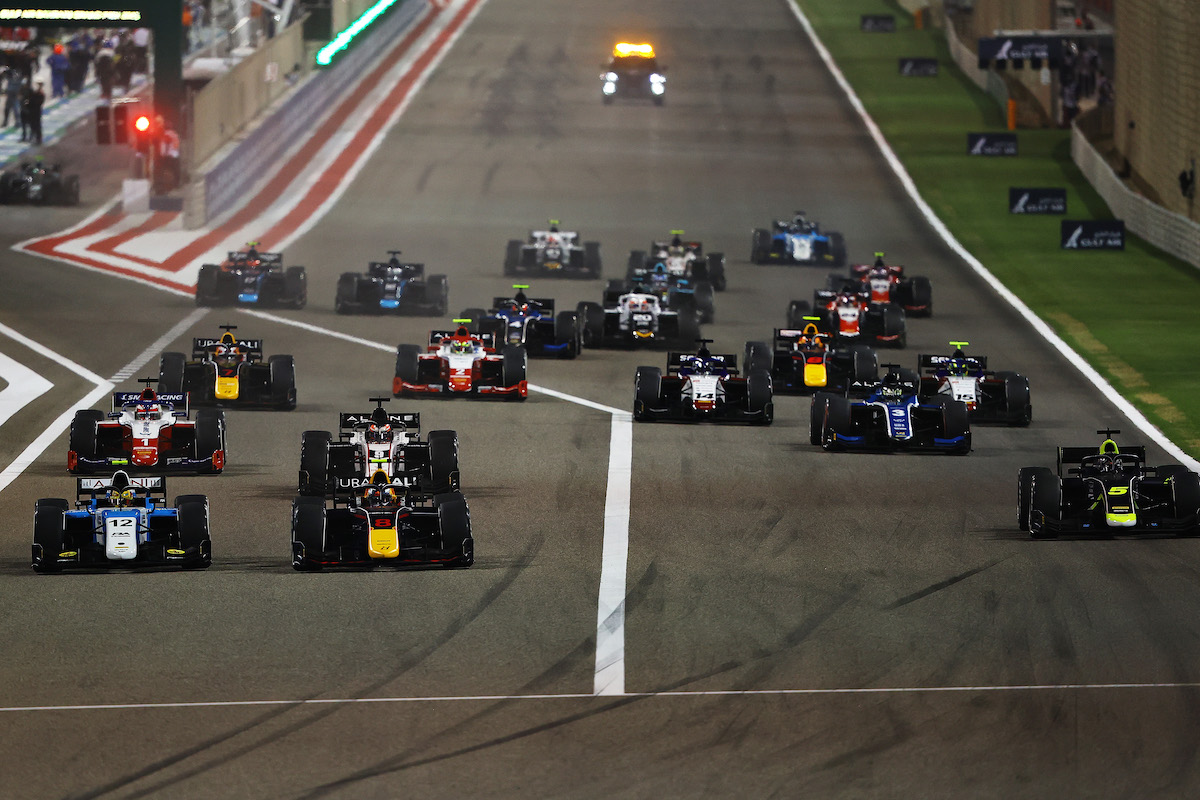 Formula 2 returned last weekend with 10 rookies, a new format and heaps of uncertainty over the pecking order. There was a lot to digest, but here are the five main points that Formula Scout took from round one

Formula 1’s season-opening Bahrain Grand Prix was a tense thriller with a victory battle that went down to the final lap. Formula 2 produced not one but three of these on the support bill in the debut of its new weekend format.

The first impressions from the format change warrant their own feature alone, but there was plenty more to take away from the first round of the season – even if the racing was so chaotic that a number of stories went totally underneath the radar.

You can listen to the accompanying podcast below, or find it on Breaker, Google Podcasts, Overcast, Pocket Casts, RadioPublic, Castbox, Apple Podcasts and Spotify.

The first two sprint races produced two first-time winners in their maiden weekends in Hitech GP’s Liam Lawson and Prema’s Oscar Piastri. While they, absolutely rightly, stole the headlines, there were a number of star drives from other rookies that flew under the radar. 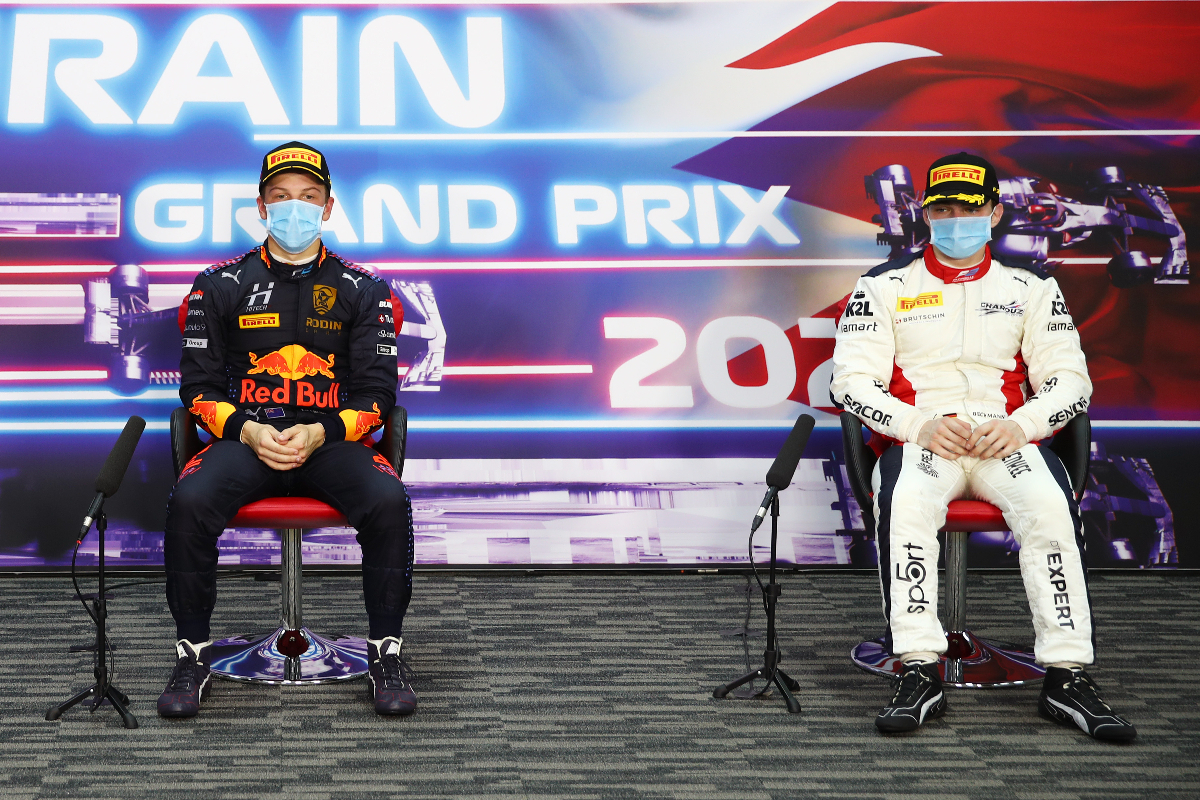 Not much was expected of HWA Racelab this season, so for Matteo Nannini – the second-youngest driver on the grid – to snatch a point (and was perilously close to stealing another) was a very solid job.

ART Grand Prix’s Theo Pourchaire beats Nannini in the age stakes, but the eight points he scored far from reflects his performances. Inheriting pole for the first reversed-grid sprint race, he was removed from the lead battle through reliability (more on that later), before recovering superbly to sixth in the second sprint despite an ill-timed pitstop, and notching up another handful of points in the feature race.

David Beckmann has been quite on the journey over the past 12 months – from not being on the FIA Formula 3 grid to finishing on the podium on his F2 debut with Charouz Racing System, and generally being solid in machinery not expected to be fighting for the big points. He was asked by Formula Scout on Saturday about his journey through the last year.

“We had 30 very good drivers [in FIA F3] and we see now how many rookies are also quick in F2. I’m just really happy to be here and also now to be on the podium, I think that I can build a good base on all these past years now,” said Beckmann.

One driver who fought for the feature win at the first time of asking hasn’t even got a full-time seat for 2021. Richard Verschoor was magnificent on his debut with MP Motorsport, qualifying in fifth and was running well in the first sprint race before being punted off by Carlin’s Dan Ticktum.

In the chaos of the second sprint, he astonishingly climbed back up to fifth and was a genuine threat for the win in the feature race before slipping back. For all of the qualms about the standard of drivers on some parts of the grid, having Macau Grand Prix winner Verschoor stay in the series beyond his one-round deal for Bahrain would be welcomed.

Regardless, the way Lawson and Piastri handled the pressure against their F1 junior team stablemates in the races they triumphed in were easily the most impressive performances of the bunch. Both noted they were “learning on the go” and Piastri noted “the first half of that race showed we’ve still got some things to work on but I’m still learning all the time”. 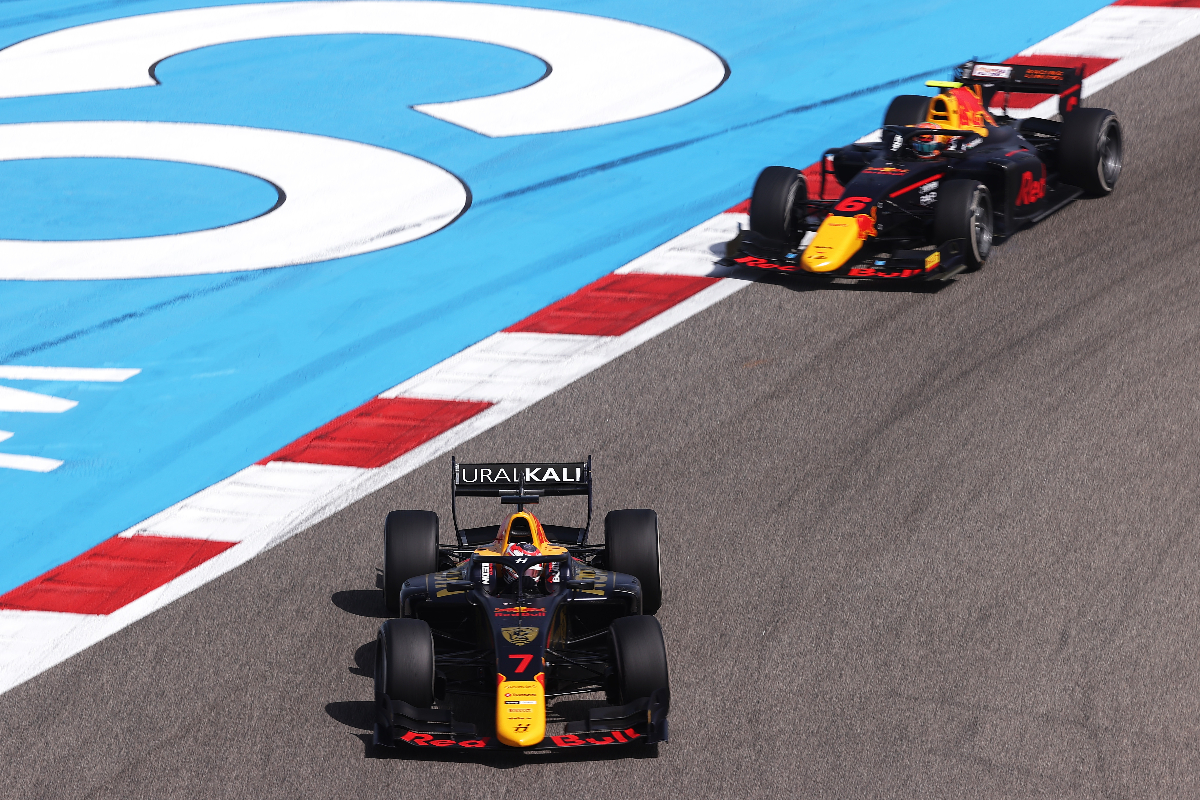 Several drivers claimed that the title battle realistically could be between no fewer than 10 drivers in 2021, and the first round certainly proved their point. With a perfect weekend score being 65 now, only one driver scored more than half of that. The competitiveness – not least showcased by the field being incredibly tight in qualifying around one of the longest laps of the year – combined with the new format shows it is going to be unbelievably difficult for a driver to run away with it this year.

Coming into the season, at least five teams looked like realistic contenders with both of their drivers. That’s 10 names from the off, and this weekend has thrown an extra one or two into the mix as well. Absolutely do not be surprised if, like in 2020, there are 12 race-winners from seven different teams across the year. But in this scenario, all of them look like they could well be in the frame for the title too.

While Bahrain has been a bit of an anomalous event in the past due to the circuit’s highly abrasive asphalt, every circuit on the 2021 calendar has a similar distinguishing factor in one way or another. So should one team perform very well at one circuit, there’s very little to guarantee that will occur at any other track.

ART’s Christian Lundgaard, however, raised a very valid question on Thursday ahead of the weekend.

“Some of them [the rookies] have done a lot of laps around Bahrain, [but] when we get to the first street circuit in Monaco, for example, where will they be?

“Then I think we have a clearer picture, again with three races per weekend. With each reverse sprint race, there are a lot of drivers who can score points.”

If it is that close, some very good drivers are going to conclude the season without picking up a single FIA superlicence point from what could be a solid push for the most lucrative crown in junior single-seater racing. 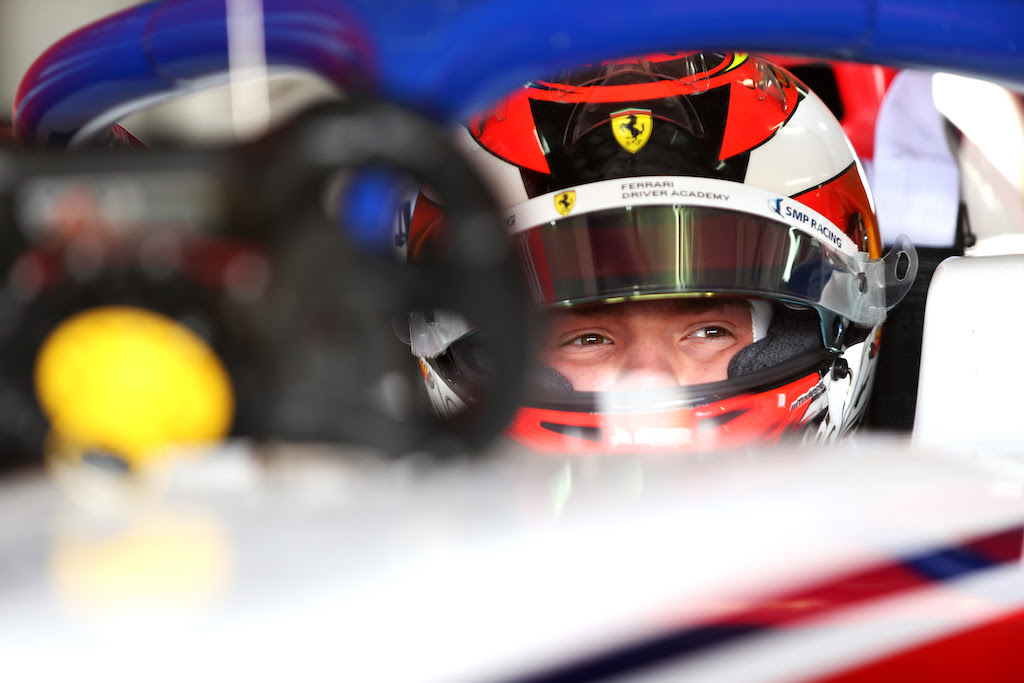 Some big names are under pressure

There is a lot of pressure on some drivers to really perform this season, and Ferrari junior Robert Shwartzman went to Bahrain as one of the title favourites and left having endured a relatively miserable weekend with many squandered points.

Driver error was behind his stoppage in qualifying, after triggering a failsafe mode when applying too much brake and throttle simultaneously. While his recovery in the first sprint to fourth place was solid, the second sprint was over fairly quickly following contact with Ticktum. Shwartzman had lunged down the inside of turn one, while Ticktum was looking to perform a switchback on the leaders.

In the feature race, Shwartzman had a difficult start and caused a collision which eliminated both HWA’s Alessio Deledda and DAMS’ Roy Nissany. Despite the penalty he got, he was able to salvage seventh with scintillating pace in clean air.

Other drivers who did not have the cleanest of weekends included ART’s Alpine junior Lundgaard, who got on the wrong side of the stewards on a couple of occasions, Virtuosi’s Felipe Drugovich and the totally luckless Juri Vips. The latter leaves Bahrain with a score of zero despite joining Hitech team-mate Lawson in being one of the fastest in qualifying and the races.

Reliability is still a problem

One of the issues that has plagued the Mecachrome-powered Dallara F2 2018 since it was first introduced has been reliability. The first race of the season took place in searing heat, and there several retirees due to mechanical woes. These continued through the event, culminating in the ever-bizarre scenario of a driver’s fire extinguisher going off unexpectedly.

Bahrain is likely to be the biggest car-breaker on the calendar, but the issues that F2 has faced in recent years continue to flare up despite the series’ commitment to improve the situation. It might add to the randomness and to the peril that makes the championship exciting to watch, but should not be expected at this level when drivers spend millions to race. 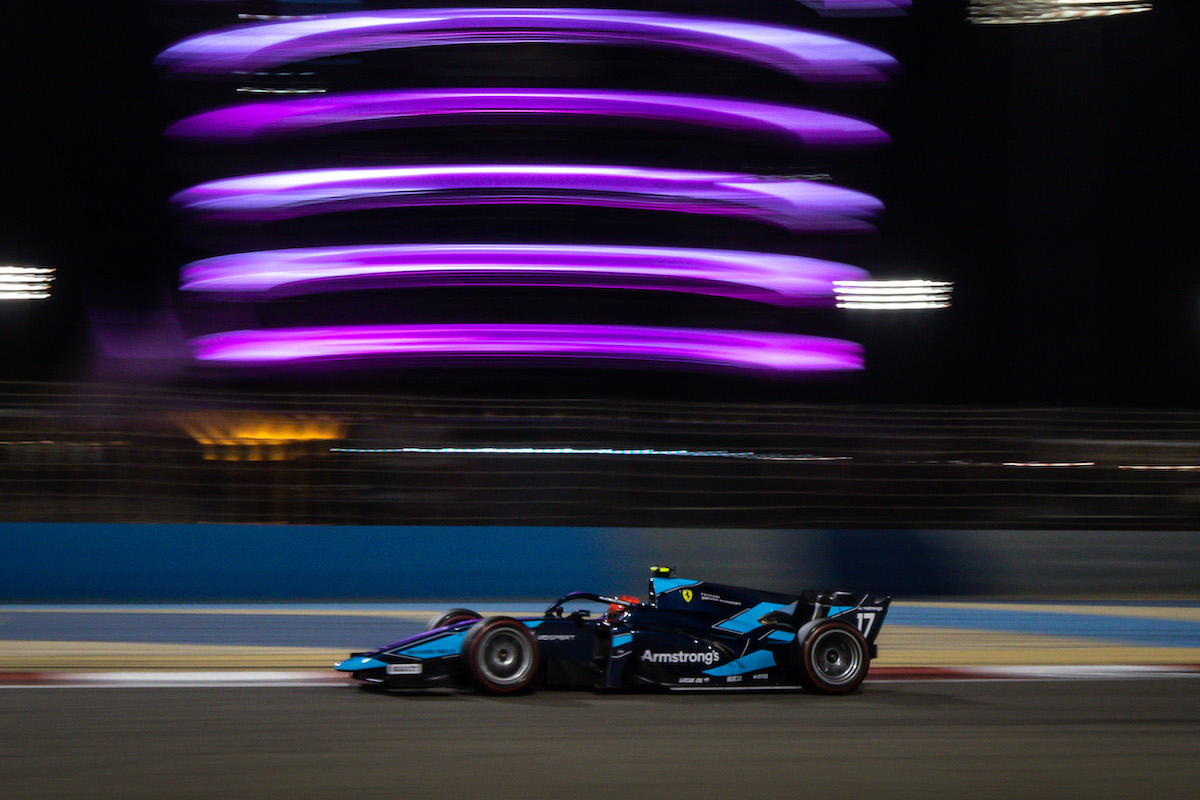 Four drivers retired from the races this weekend due to problems relating to spec parts, and Vips scraped to the line after losing the ability to downshift while fighting for victory in the first sprint race. Had he not nursed the car as successfully as he did, he could have destroyed more of the car.

Some of the drivers were asked during the weekend for their thoughts on the unreliability.

“This year we are losing even more sensors in the car meaning there may be even more problems, but hopefully not,” Virtuosi’s Guanyu Zhou said. “It was OK at least in the pre-season test but it is difficult for me to judge.”

Beckmann took a more expansive view to the topic.

“At the first race of the season, something always happens with some drivers or teams but I think otherwise there were some problems with F2 cars in the past but I think they managed it quite well – Mecachrome and Dallara as well as the FIA – so it’s always bad for drivers for sure, but otherwise maybe it happens at the first weekend and I hope the teams know what was the problem,” he said.

Lawson said reliability issues inflicted him in testing rather than the race weekend, but also said it was fairly normal for the opening round to expose any mechanical trouble, particularly in the hot and sandy conditions of Bahrain.

“On the grid, I don’t know about the other guys, but we were really in high temperatures on the grid, especially with the oil and the water, so maybe it’s something to do with the temperature,” Lawson added. 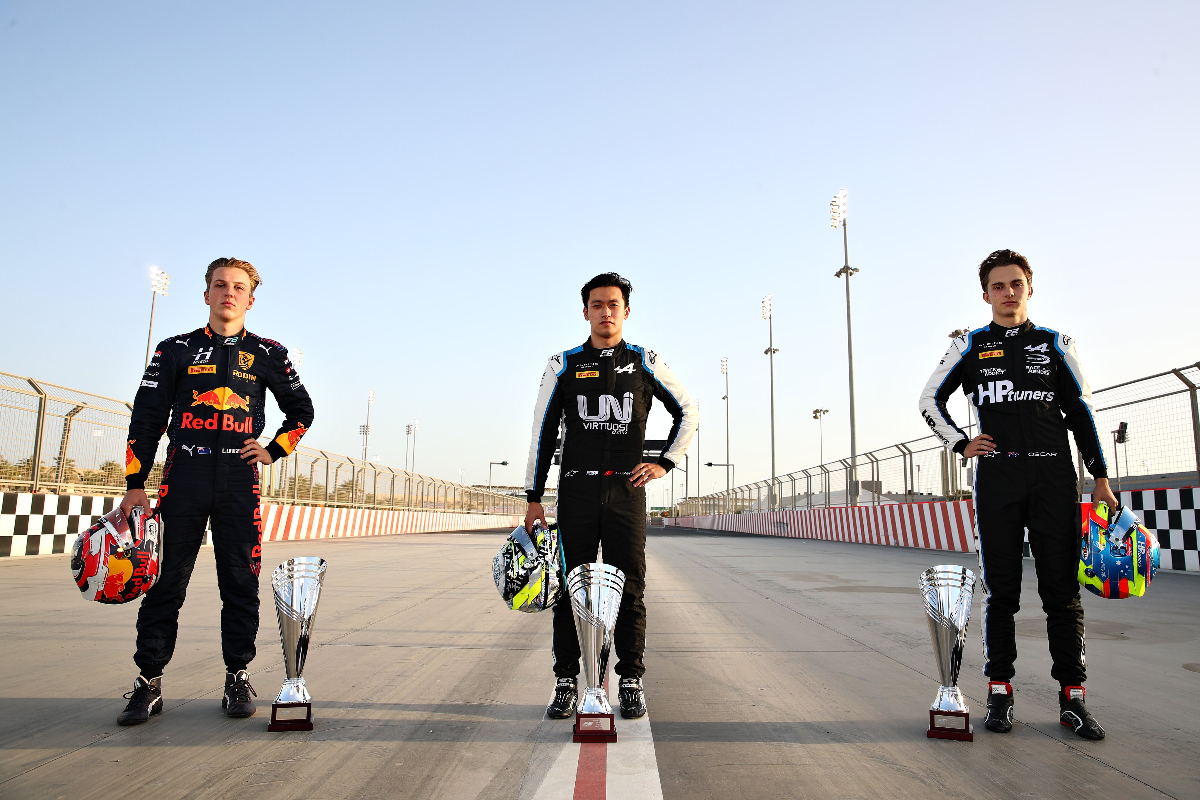 Round two will be very different

It has already been touched on, but the next round is on the famous streets of Monte Carlo in just under two months’ time. Weather conditions, tyre wear and overtaking opportunities will be drastically different to Bahrain, and all bar two of the drivers – Zhou and Ralph Boschung – have never raced there in F2. More than half of the grid has never raced there at all.

“Going to Monaco is going to be a completely different story,” Zhou said. “Especially with these sprint races, the top 10 is pretty much going to be the order they started at.

“So, it’s going to be a little bit less exciting, but we’re always going to be taking as many points as we can and that makes the championship interesting.”

“Monaco is just the event really, isn’t it?” Ticktum quipped. “In qualifying, it’s amazing to drive a lap on the edge in any street circuit, but if you qualify on pole, you’re then starting in 10th, unless you do two people off the line, you’re not really going to get past anyone, so I think you just have to soak up the atmosphere in Monaco.

“But we’ll see when we get there, the feature race obviously will be the big one. So qualifying is still obviously very important for that.”

Lawson added: “People got away with it this weekend, because of how big the degradation was and things like that, but when we do go to tracks like Monaco and tracks that are harder to pass on, and the degradation’s not as big, qualifying is really, really important. Basically, being inside the top 10 is going to be massive, because if you’re not and you have an issue in quali or something like that, there’s a good chance that you’re going to be starting towards the back in all three [races] really.

“So, it’s really, really important to qualify in the top 10, and if you’re in that top 10 then obviously the first two races are completely mixed grid and you’re in with a shot.”

Read all of our coverage of the Bahrain F2 weekend here