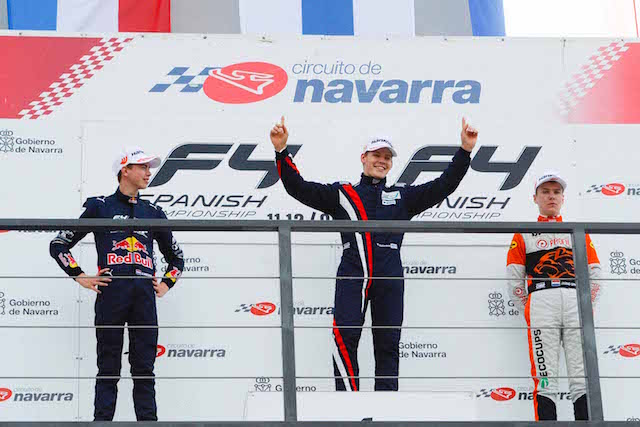 Finnish drivers?Roope Markkanen?and?Tuomas Tujula?claimed the victories on Sunday at the opening Spanish Formula 4 round at Navarra.

Markkanen took the race two victory from fourth on the grid, benefitting when Dutch rivals?Jarno Opmeer?and?Richard Verschoor collided and ran wide while fighting over the lead.

Red Bull Junior Verschoor had started from pole after winning race one but was passed early on by SMP F4 leader Opmeer, who had started third. Verschoor’s attempted fightback led to?the clash?that presented?Markkanen with a maiden F4 win.

Verschoor finished less than four tenths behind, with Opmeer completing the podium 2.5s back.?Alexander Vartanyan had another poor start but finished fourth, just ahead of the sole Spanish driver Xavier Lloveras.

Vartanyan made an even worse start in race three, stalling on?pole position. Verschoor took up the lead, but was forced to retire when he got stuck in third gear.

That handed the lead and eventually victory to Tujula, who finished last in race two after being penalised for jumping the start.

Behind that, there was a collision between Opmeer and Lloveras of which Markkanen was the beneficiary once again,?the Finn finishing second from seventh on the grid and taking the early championship lead.