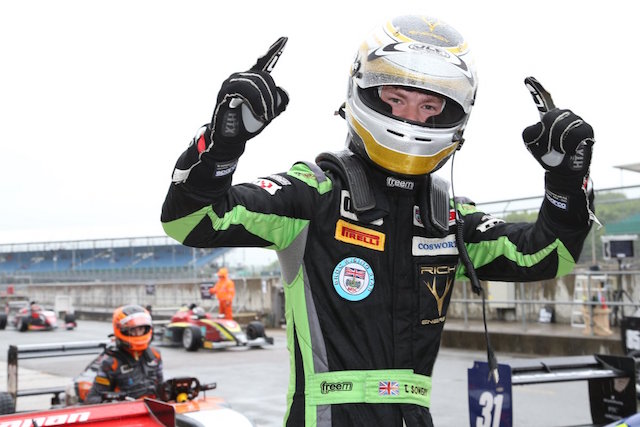 Toby Sowery won the reverse-grid BRDC British Formula 3 race two at Silverstone ahead of?Lando Norris, who sailed from 17th to second in the wet.

From second on the grid, Sowery would take the lead away from polesitter?Jan Jonck on the opening lap, but only after championship leader?Ricky Collard had shot from fifth to first by Stowe before running wide and falling down to seventh.

Sowery was able to open up a lead of nearly 10 seconds within five laps, before the safety car intervened following contact between?Collard and?Quinlan Lall?at Luffield?as they fought?Thomas Randle?for fifth, leaving Collard down in 14th and the American stranded in the gravel.

Norris had climbed from 17th to second within the first four laps and the safety car allowed him to catch up to Sowery, but there would be no restart.

Race one winner?Matheus Leist?progressed from eighth to third on the first lap, and briefly passed?Sisa Ngebulana for second before running wide at Vale to let the South African past. Norris caught and passed the pair around the outside of Stowe and Abbey on lap four, with Leist able to beat Ngebulana to the final podium place.

Ngebulana spun under the safety car and overtook a number of cars under yellow flags to regain his fourth position, meaning he was excluded.

The third and final race of the weekend was cancelled after thunderstorms caused the meeting to be abandoned.