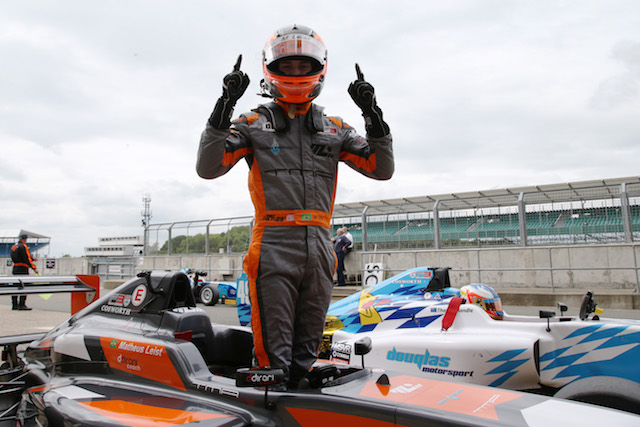 Matheus Leist?claimed his third victory of the BRDC British Formula 3 season in an opening race of the weekend at Silverstone shortened by a start-line crash.

Leist made a poor start on the initial getaway and lost second place to Lando Norris, but that would be academic after?his Double R team-mate?Enzo Bortoleto stalled and was collected by?Krishnaraaj Mahadik.

This initially triggered a safety car, but the race was then suspended and would be restarted from the original grid positions with a new distance of six laps.

This time Leist made a great start to take the lead away from polesitter?Thomas Randle, and built a lead of 1.3 seconds on the first lap. He stretched that to 4.3s over the course of the race.

Norris took second away from Randle into Brooklands for the first time, but on lap three he ran wide at Becketts, broke his suspension and was sent into the barriers.

That promoted Randle back into a comfortable second, while Tarun Reddy completed the podium after keeping championship leader?Ricky Collard at bay.

Harrison Scott, returning with HHC after competing in last year’s Autumn Trophy, had passed Collard on the opening lap, only to slow into?retirement on the following tour.