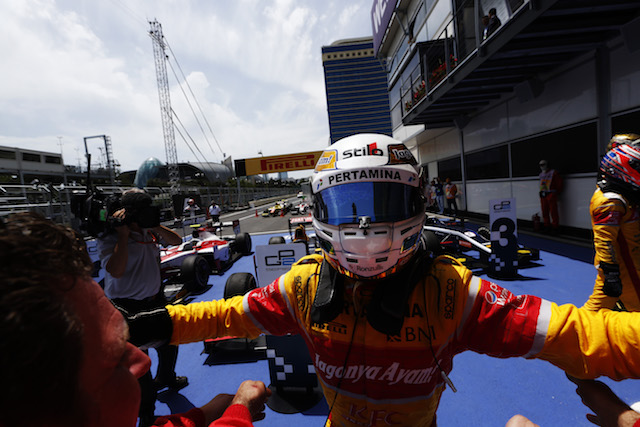 Antonio Giovinazzi produced a superb fightback to take a first GP2 win for himself and fellow newcomer Prema in Baku.

His efforts to claim pole in Friday seemed to go to waste when he made a dreadful getaway, emerging from Turn 1 in fifth?place as no fewer than five cars were eliminated in contact, including Alex Lynn and Pierre Gasly.

After an initial safety car period, Nobuharu Matsushita and Raffaele Marciello traded the three times, with the Italian regaining the lead into Turn 3 just before a second safety car, caused when Philo Paz Armand found the barriers at Turn 1.

The leaders pitted together at this stage, and when Jordan King followed the safety car into the pits,?Marciello continued to lead Matsushita, Oliver Rowland and Giovinazzi.

After safety car three, triggered by?Arthur Pic tripping over Artem Markelov at Turn 4, Marciello made a very good restart to move clear into Turn 1 as Matsushita was swamped by Rowland and Giovinazzi.

Giovinazzi was able to pass Rowland and soon closed the gap to Marciello to take the lead from his fellow Italian into Turn 1.

He immediately built a two-second gap that was then instantly eradicated by the fourth and final safety car – caused by a failed attempt by Nato to lunge team-mate King as they battled over last place.

This safety car remained out for some time – perhaps not helped by King twice ending up down escape roads after pitting for fresh tyres – and there was only time for?two racing laps at the end.

Aware of the threat of being passed down the long straight, Giovinazzi left his restart very late and then locked up and ran deep at Turn 1, but he somehow managed to stay ahead and then break clear to take victory by over a second.

Marciello would be robbed of second place at the line by Sergey Sirotkin, who fell?as low as 10th early on before a good recovery, passing Rowland at the final restart prior to attacking Marciello as he finished a race inside the points for the first time this season.

When passed by Giovinazzi, Rowland claimed on the radio that he was “playing the long game” but the lengthy final safety car meant he had no pace advantage on the cars ahead and he was left to settle for fourth.

Mitch Evans took fifth ahead of Matsushita, who floundered as the race wore on.

In a race where only 10 cars finished,?Sean Gelael – whose father’s backing made Giovinazzi’s rise to GP2 possible – claimed seventh place and Daniel De Jong took eighth and reverse grid pole, despite making a brave pitstop out of that same position for fresh super-soft tyres under the final safety car.

Luca Ghiotto?ran third in the early stages but?struggled for speed later on and finished back in ninth, with?Gustav Malja the final finisher after King and?Jimmy Eriksson tangled at the back of the pack on the penultimate lap.

Despite a dreadful race, in which he tangled with Gasly on the inside of Turn 1 at the very beginning, Nato remains the championship leader as Markelov, Lynn and Gasly failed to finish.

Having made the Turn 1 contact with Nato, Gasly was then rear-ended by?Sergio Canamasas, with Lynn being hit further down the order and Nicholas Latifi and?Marvin Kirchhofer?also ending up in the run-off area.