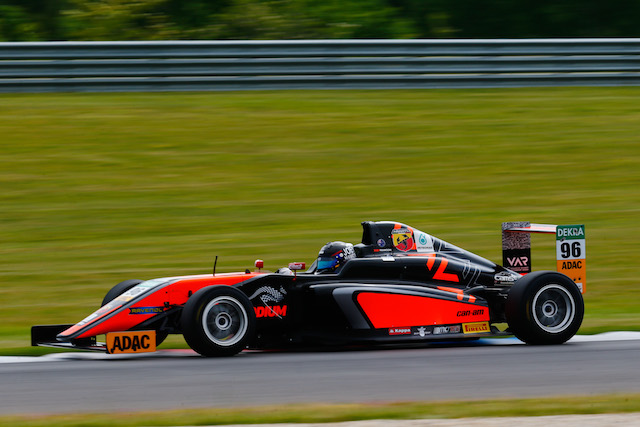 Joey Mawson wins the first ADAC Formula 4 race at?Oschersleben as the series visits the track for the second time this season.

Though the Australian driver spent the initially red-flagged race tucked behind pole sitter Thomas Preining for much of the duration, a decisive move into the Turn 3 hairpin secured him the win with less than five minutes on the clock.

The race got as far as the first corner before the red flag was brought out as several cars collided into each other. Mawson had got past front row?starter Mick Schumacher into Turn 1?but with the grid reset he would have to do it all again later on.

With the race restarted under the safety car, Preining could?easily lead away from Schumacher, with Mawson able to retake the German into turn one a lap later.?Preining was able to build up a two-second lead at one point, but once Mawson got by for first,?Preining struggled for grip and barley held off Schumacher for second.

Felipe Drugovich finished a distant fourth despite keeping up with Schumacher in the early stages of the race, with?Juan Manuel Correa glued to his gearbox in fifth position.

Mike Ortmann made his way up the field?to finish two spots ahead of where he started in sixth position, with Motopark duo Simo Laaksonen and?Jonathan Aberdein following behind the German driver in seventh and eighth respectively.

Recently signed Red Bull junior driver?Richard Verschoor made his debut in the series with Motopark, making up five positions on his way to 12th by the chequered flag.