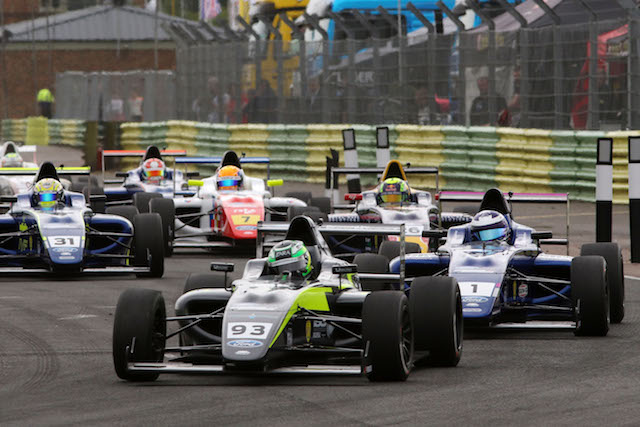 Zane Goddard claimed a?maiden British Formula 4 victory from his first pole position in the opening race of the weekend at Croft.

The Australian Double R driver, whose previous best finish was fourth after he went off from the lead during the previous round at Oulton Park, gradually opened up a lead of 4.3 seconds prior to a late-race safety car.

That put Devlin DeFrancesco onto his tail for a one-lap shootout, and the pair ran side-by-side through the first corner, but Goddard was able to hold on.

Unsuccessful in his bid for the lead, DeFrancesco – who had held a similarly comfortable margin in second place prior to the safety car – came under attack from behind and would slip to fourth behind Red Bull Junior?Luis Leeds?and?Max Fewtrell, the Australian having made a great start from fifth to climb to third at the start.

However, after the race, Leeds was penalised for cutting the chicane on the final lap, with two tenths added to his time to drop him to third behind Fewtrell.

Jamie Caroline finished fifth after switching from Jamun Racing to Fortec Motorsports. Up from 13th to seventh on the first lap, he passed?Rafa Martins and?Alex Quinn on the final tour but made contact with the latter, putting his new team-mate out of the race. Caroline will start race two from reverse grid pole, with only 11 drivers having completed the opener.

James Pull dropped to the back after contact with?Ayrton Simmons on the first lap but would finish up?eighth behind?Jack Martin, passing?Patrick Matthiesen and?Frank Bird on the last lap.

Championship leader?Petru Florescu had a torrid day, qualifying only eighth and then being eliminated in first-lap contact. He remains ahead in the points, but has seen his gap over Carlin team-mate Fewtrell cut from 22 to just four.

Sennan Fielding joined Florescu?on the sidelines early on, while it was a race-ending collision between Jack Butel?and?Nicolai Kjaergaard that triggered the late safety car.