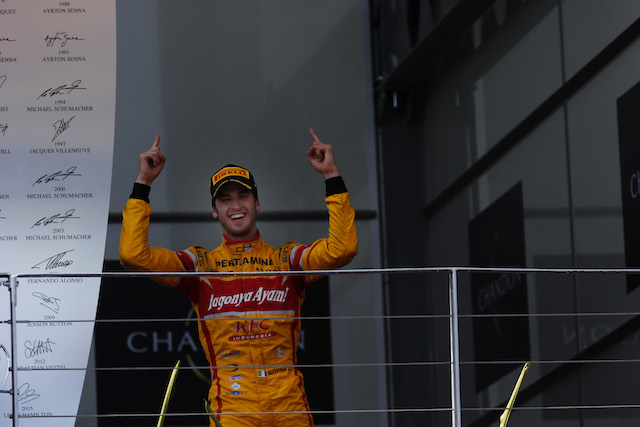 Antonio Giovinazzi secured?an incredible double victory on just his third GP2 weekend in Baku, despite falling off?the back of the pack on the first lap of a crazy sprint race.

The Italian stole the win?from?Pierre Gasly?when he forced his Prema team-mate into an error at Turn 1 for the final time, having challenged the Red Bull Junior?into the corner for several laps despite not having DRS available.

Giovinazzi, who said afterwards that he had a problem with his engine on the first lap, becomes the first double winner in GP2 since Davide Valsecchi in Bahrain in 2012.

The Prema pair had been gifted the lead after three consecutive chaotic restarts, having both been outside of the top 10 during the first safety car.

Nobuharu Matsushita?had taken the lead at the start from third on the grid and led pole-sitter Daniel De Jong?by around 1.5 seconds in the relatively serene early?stages prior to the first safety car, caused when?Jordan King and?Jimmy Eriksson collided at Turn 1.

However, the Honda protege would contribute to carnage at the restarts that followed. At the first, he floored the throttle at Turn 16, the last proper corner, which meant that he caught the safety car too soon and braked.

Oliver Rowland capitalised to sweep from third to first, only to lock up and run deep at Turn 1, as MP team-mate De Jong did the same behind and almost collected the Briton.

Matsushita was therefore handed the lead back as the race returned to safety car when?Philo Paz Armand went off.

This time he wanted to keep the field bunched until the last possible moment, but misidentified the safety car line, accelerated and then braked again before reaching the actual safety car line.

This caused contact behind, with?Gustav Malja removing his front wing against?Mitch Evans and being unable to stop in time for Turn 1, pitching Rowland into a spin.

Another safety car followed, with?Raffaele Marciello up from seventh to second and able to challenge Matsushita at the restart.

The Italian locked up massively though, and despite having edged ahead of Matsushita in the braking zone, the ART driver turned in regardless and caused a collision.

That gifted Gasly the lead, with he and Giovinazzi pulling away from third-placed?Sergey Sirotkin, but the Frenchman?would fail in his bid to score a first win in racing since September 2013.

Sirotkin took third, having climbed into second behind team-mate Matsushita at the first restart but lost the tip of his nose in contact.

King recovered from facing backwards at Turn 1 to finish fourth ahead of?Artem Markelov, who takes the championship leader after?Norman Nato failed to finish.

Sergio Canamasas was forced into a halt by the King-Eriksson collision ahead of him but fought back to sixth?in the closing stages, ahead of?Nabil Jeffri, Arthur Pic,?Alex Lynn and?Marvin Kirchhofer.