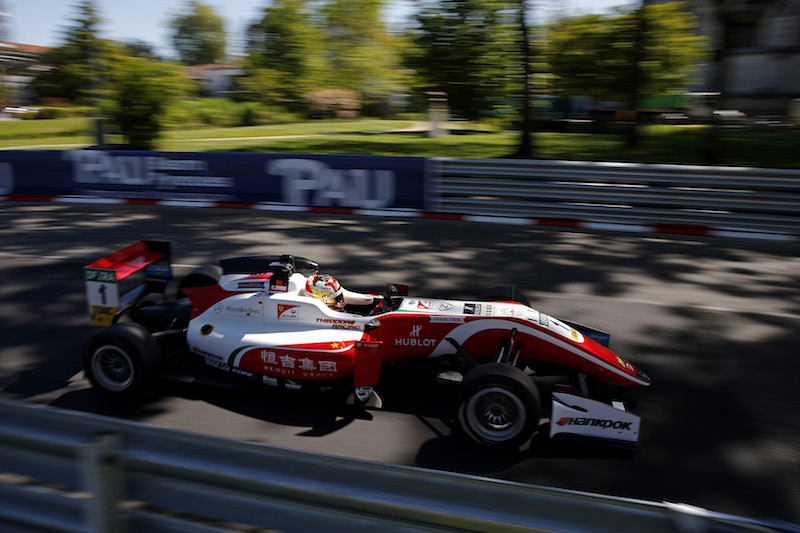 Ferrari junior Guan Yu Zhou has kicked off his third season in the Formula 3 European Championship with his maiden victory in race one on the streets of Pau.

The Chinese driver had missed out on pole to Dan Ticktum by just 0.009 seconds in Friday afternoon’s split qualifying, but took at the lead at the start as Red Bull junior Ticktum lit up his tyres.

He led Tickum by only four tenths of a second at the end of the first lap, but doubled that gap on lap two before a full-course yellow to recover the stranded car of Devlin DeFrancesco.

The track went green just as the leaders came over the start-finish line, and Ticktum was close enough to attack Zhou into Gare and up the hill towards Pont Oscar, but couldn’t get past.

There was a full safety car at the end of the lap to retrieve Ben Hingeley’s car, and this time at the restart it was Ticktum under attack from Zhou’s Prema team-mate Ralf Aron.

The Estonian somehow managed to go around the outside of Gare and claim the place, despite contact from Ticktum forcing him towards the barriers.

Aron never really got close enough to challenge his fellow third-year driver Zhou, who coped well with another safety car restart with just two minutes remaining on the clock.

Ticktum was forced to defend again on the final restart from Sacha Fenestraz but held on to take third.

It was another Prema driver Robert Shwartzman who sat fourth early on, but he was mysteriously slow coming out of Foch on the lap following the full-course yellow, dropping him down the order and promoting Fenestraz.

Top F3 debutant Marcus Armstrong was also the lead Pau first-timer in fifth, making up four places from ninth on the grid.

Fellow newcomer Enaam Ahmed was close behind in a superb sixth, putting a bold move on his Hitech team-mate Alex Palou into the tight Lycee hairpin on the first safety car restart.

Practice pace-setter Mick Schumacher had made some good early progress from the ninth row of the grid up to 13th following his qualifying crash, but lost out when Fabio Scherer came up his inside at Lycee and left the Prema driver facing the barriers on the outside. He finished 16th of 17 finishers.