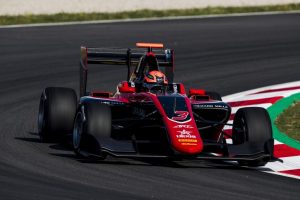 Mazepin, who started the race second on the grid, took advantage of a poor start for polesitter Leonardo Pulcini to take the lead. Team-mates Anthoine Hubert and Callum Illot vaulted to second and third respectively.

Extending his lead to 1.8 seconds within the first handful of laps,?Mazepin managed this advantage throughout the first half of the race. A battle for second between Hubert and Illot for second allowed him to further add to his lead in order to take a comfortable victory.

Hubert did set the fastest lap of the race with two laps to go to reduce Mazepin’s lead by 0.6s, but by this point the Renault-affiliated driver was too far behind to challenge for the lead and finished over three seconds behind. Hubert had lost time mid-race when Illot demoted him to third for seven laps.

Pulcini finished fourth, but the four point for pole means he sits ahead of Ilott in the standings.

He initially?slipped to fifth when MP Motorsport’s Dorian Boccolacci scythed passed with the use of DRS on lap 4. Boccolacci’s?pace deteriorated dramatically in the closing stages, allowing Pulcini to regain fourth with four laps remaining.

Boccolacci had to defend from Jenzer Motorsport rookie David Beckmann on the last lap. Beckmann had used all six of his DRS opportunities by this point, which served to blunt his attack. The two finished fifth and sixth respectively, with Trident’s Giuliano Alesi close behind in seventh.

Juan Manuel Correa won a close fought?battle for eighth place and reverse grid pole. The Jenzer Motorsport driver seemed destined to finish 10th before a battle between Jake Hughes and Alessio Lorandi for eighth place allowed him to catch up.

Heading onto the gravel at Turn 2 after trying to pass Hughes on the inside before running wide, Lorandi was passed by Correa, Pedro Piquet and Diego Menchaca.

Hughes’s tyres had hit the cliff of performance. Correa quickly closed in on the ART and passed with the use of DRS on lap 17 to finish eighth and secure reverse grid pole. Piquet and Menchaca finished ninth and tenth.

Lorandi from his gravel excursion to finish 11th, with Gabriel Aubry in 12th. Hughes slipped to an eventual 13th.

After his team forgot to remove a left sidepod?fan from the car prior to the formation lap, Simo Laaksonen sacrificed his seventh place on the grid and started from the pitlane. He finished 15th. Niko Kari was slow away from the grid at the start and subsequently forced into retirement?with a technical fault. Tatianna Calderon was the race’s only other retirement.