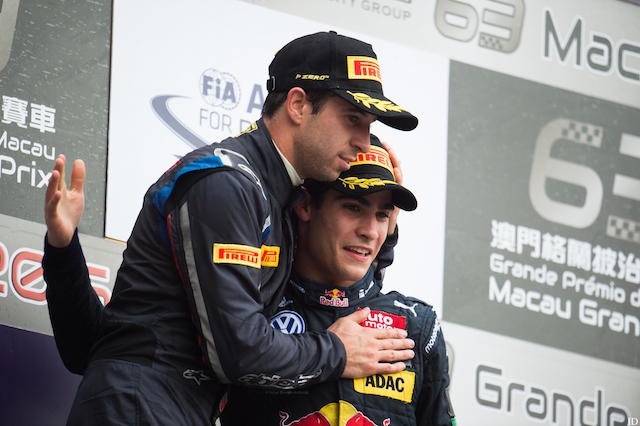 Callum Ilott made the best start from second on the grid, but this simply left him vulnerable on the run to Mandarin, with third-place starter Sette Camara and polesitter Felix da Costa flying past on either side.

The trio were then side-by-side under braking at Lisboa, where Sette Camara braked late on the inside to keep the lead while Ilott was hung out to dry and fell to fifth behind?Kenta Yamashita and?Felix Rosenqvist.

Eyeing his first ever car racing victory, Sette Camara pulled out a 1.2-second lead on the opening?lap and then continued to stretch it, but he was caught again by Felix da Costa just as the safety car was deployed on lap five of 15 after?Nikita Mazepin crashed at Faraway Hill.

At the restart, Felix da Costa was able to slipstream past Carlin team-mate Sette Camara before they reached Lisboa.

The safety car was back out four laps later when?Nick Cassidy went off at?Faraway, having recovered to 11th from the back of the grid following an engine change.

Sette Camara didn’t make a great restart, losing ground to Felix da Costa as he tried to warm his tyres, yet he still got alongside under braking for Lisboa.

Felix da Costa had the inside line though and was able to pull a gap as Sette Camara fell into the clutches of?Rosenqvist, who got by on the penultimate lap, posted the fastest lap and closed to within a second of the leader.

The Portuguese factory BMW ace was safe out front though, and the 25-year-old won by 1.6s as he repeated his 2012 triumph.

His fellow DTM driver Rosenqvist missed out on an unprecedented hat-trick of Macau wins but concluded a difficult weekend with second, whilst 18-year-old Sette Camara was the lead ‘junior’ home after an unremarkable European campaign as a Red Bull Junior.

After a fine weekend where he and T-Sport were?among the frontrunners throughout, Japanese champion Yamashita finished a fine fourth.

Ilott followed Rosenqvist past Yamashita at the start of lap three in a tight move at Lisboa, but slipped back behind on the final restart to fifth.

From 10th on the grid, GP3 regular?Jake Hughes?beat qualifying pacesetter?George Russell to sixth?place and the honours of top Macau debutant.

The 2011 winner?Daniel Juncadella had a quiet run to eighth, while?Pedro Piquet was rewarded for a clean weekend with a strong ninth. After impressive Double R team-mate?Dan Ticktum and 16-year-old Mucke driver?David Beckmann?dropped out of the top 10 in?an incident,?Alexander Sims completed the top 10.

Lando Norris?came from the rear of the grid following his first-lap qualification race crash to finish 11th in his second FIA F3 event, in front of local driver?Chang Wing Chung.