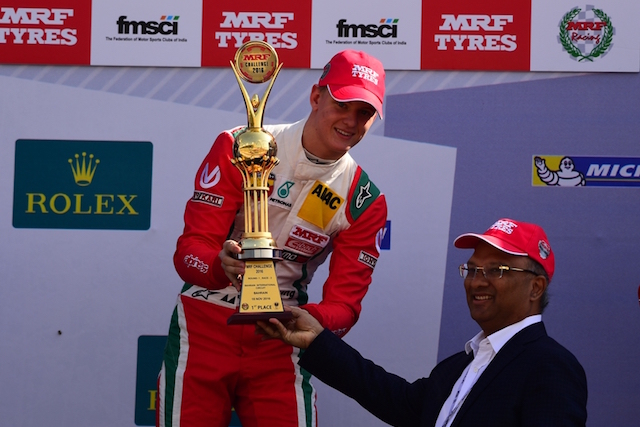 Returning for a second season in the series, Newey was on top in the first of the four races after qualifying on pole position. The Van Amersfoort Formula 3 racer was two seconds clear of the pack after the first lap, and finished up five seconds out in front.

Debutants?Aron and?Joey Mawson?battled over second place, with the Prema F3 driver recovering from a poor start to get ahead of VAR’s ADAC F4 champion on lap three of 10. Schumacher was beaten to fourth by his Prema F4 team-mate?Juri Vips.

The German started from the front row of the reverse grid for race two though, got the jump on polesitter?Felipe Drugovich?at the start and pulled away to victory.

From fourth on the grid, Mawson came through to second ahead of Aron, Newey and Drugovich.

In race three, Mawson got the lead at the start in front of Schumacher and Aron, but after a safety car for an incident involving polesitter Harrison Newey,?it was the Estonian that charged through to win by 6.5 seconds over the Australian, while Schumacher held off Drugovich for third.

Schumacher then made a great start from fourth in the grid in the finale to take another win, victorious by 2.3s over Vips.

Schumacher’s second win gives him a three-point championship lead over Aron, with Mawson a further 11 back.