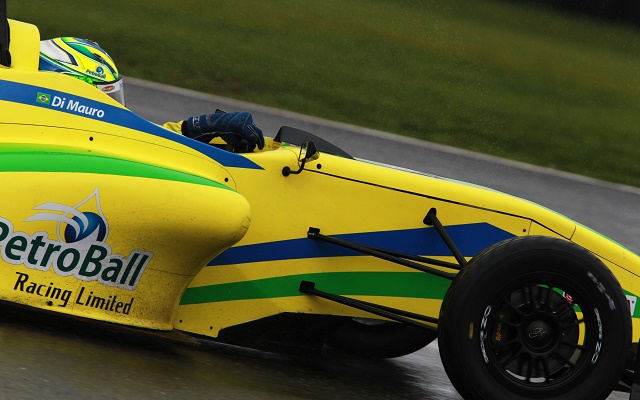 Gaetano di Mauro‘s second victory of the BRDC F4 Winter Championship has seen the Brazilian take over at the lead of the points standings with three races to go.

Di Mauro started the first race of round two at Brands Hatch on front row and was into the lead by turn one, making his way past Connor Jupp, who also dropped behind Jordan Albert.

However, poleman Jupp would not remain behind Albert for long, soon retaking second and setting out after di Mauro.

The Mectech driver managed to get rather close to the leading Brazilian, with just half a second separating them after 13 laps, but it was then that di Mauro ramped up the pace, taking his lead back to a second and keeping it up until the checkered flag. Jupp would have to do with second, marking the karting star’s first podium in junior single-seaters.

Behind them, a heated battle for the final spot in the top three unfolded, with Sean Walkinshaw Racing’s Albert trying to keep a charging Rodrigo Fonseca at bay. The fight eventually ended in late contact and Fonseca was spun around, allowing Albert to comfortably claim third.? The Mexican himself managed to recover to take fourth.

HHC’s Zubair Hoque claimed fifth, one spot ahead of teammate Will Palmer, who had to fight back through the field after spinning on the opening lap and ended up forfeiting the championship lead.

In the standings, the two clear frontrunner di Mauro and Palmer are now separated by six points – 157 to 151. Jupp is best of the rest in third after his breakthrough result, sitting at 109.

Having set the fastest lap, Fonseca is set to line up on pole for race two. Albert will be alongside him, with Jupp and di Mauro on row two.