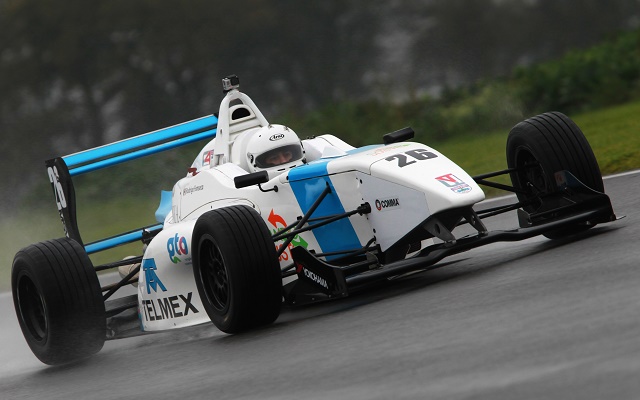 Mexican racer Rodrigo Fonseca claimed his first victory in junior single-seaters with a stellar drive from pole in race two of the BRDC F4 Winter Championship finale at Brands.

Starting from pole after having set the fastest lap in race one, Fonseca quickly established a solid gap over Jordan Albert and managed to slowly edge away as the laps ticked down.

In the end, the Mexican would end up having a very straightforward race and eventually took the checkered flag three seconds in the clear.

While there wasn’t much of a fight for the race lead, the race saw crucial developments in the title fight.

Championship frontrunners Gaetano di Mauro and Will Palmer managed to get ahead of Connor Jupp off the line, but the race one poleman kept his cool, quickly retaking fourth from the Brazilian and then picking Palmer off for third.

He’d go on to push Albert for second, as Palmer and di Mauro battled behind. They then ended up both catching up to Jupp and demoting him back to fifth.

Immediately after that, there was contact as the Mectech driver ran into the back of di Mauro, ending their respective races.

Eventually, Albert would hold on to second, while third for Palmer proved more than enough to reclaim the championship lead.

Fernando Urrutia recorded his best finish in BRDC F4 in fourth, while Paul Sieljes and Enzo Bortoletto achieved the same feat in fifth and sixth.

Having suffered a broken front wing early on, Zubair Hoque completed the order in ninth.

With two races remaining, Palmer now leads at 175 points to di Mauro’s 157. Fonseca now also joins the picture, as his win takes him up third and 140 points.