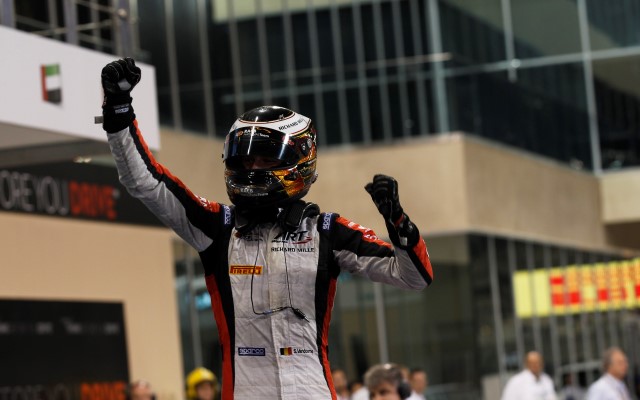 Stoffel Vandoorne drove to a superb fourth victory in the GP2 Series in the feature race at the final round in Abu Dhabi, moving him up into the championship runner-up position.

Starting from a record fourth consecutive pole position, the Belgian rookie made a good start to lead the early laps, which included a safety car period after contact further down the order.

In the two laps after the restart he built up a four second margin over the cars behind, before making his pitstop to swap his supersoft tyres for mediums.

Champion Jolyon Palmer started on the mediums from alongside Vandoorne on the front row, and was passed by a charging Felipe Nasr on lap one. Nasr quickly cooked his tyres after the restart however, dropping him back behind Palmer and Mitch Evans before pitting at the same time as Vandoorne.

While Palmer and Evans stayed out at the head of the field for much of the race, Vandoorne had to work his way past some of the slower late-stopping traffic. He took eighth from Artem Markelov with a bold move at turn one, and then seventh from Jon Lancaster at the final corner.

However, there was then slight contact on the pit straight that damaged Lancaster’s front wing as Vandoorne moved slightly left to cover. The incident was investigated, but no action was taken.

Palmer and Evans pitted together with nine laps left, and Palmer only just emerged from his pitbox ahead, before locking up going into the tunnel at the pit exit and coming close to hitting the wall. He was investigated for an unsafe release, but again the stewards took no action.

Vandoorne held an eight-second lead with eight laps left, but Palmer quickly cut the gap on his fresh tyres to 6.6s within a lap. The gap came down as far as 5.5s, but Palmer then lost the pace in his tyres and Vandoorne opened up a 12-second margin in his final five laps.

With driver Nasr finishing fourth behind Evans after a late pass on Johnny Cecotto, Vandoorne has moved nine points ahead of the?2015 Sauber driver in their fight for the runner-up spot. Vandoorne’s form gives McLaren a further dilemma over their driver decisions, and the team announced immediately after the race that he will do both days of the F1 test in Abu Dhabi next week.

Cecotto had started back in 11th but made the most of his longer first stint to emerge from his stop in fourth, but lost out to Nasr and Stephane Richelmi when he quickly ate through his new tyres. Fellow late stopper Stefano Coletti finished seventh ahead of Arthur Pic and Rio Haryanto, while Daniel De Jong stole P10 away from Raffaele Marciello on the last lap.

Red Bull Junior Pierre Gasly was the most notable casualty of contact in the pack, the P6 starter being forced to pit for a new front wing after a hit from Andre Negrao just after his tyre change. The safety car was triggered when Rene Binder tagged Lancaster into a spin and got his car stuck on a kerb.