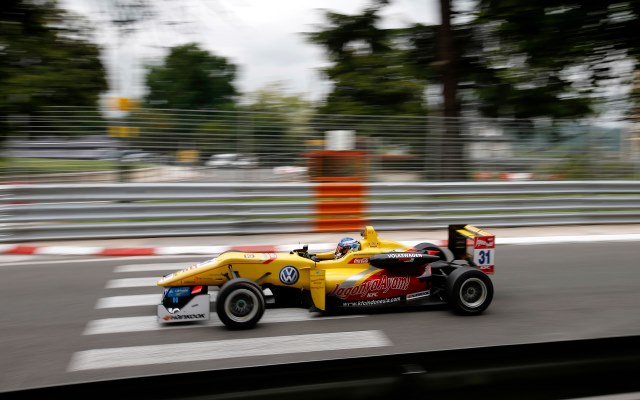 Tom Blomqvist put a late pass on Esteban Ocon to claim victory in a second FIA F3 European Championship race in Pau that was full of drama.

On a wet track, the race began with five laps behind the safety car. When the race got going, pole-sitter Ocon led Felix Rosenqvist and Max Verstappen.

That’s the way it stayed until lap 12, when car racing rookie Verstappen lost control at the Foch chicane and reversed into the tyre wall, bringing an early end to his race.

Rosenqvist meanwhile was pressuring Ocon for the lead, and on lap 14 there was contact between the two at the top of the hill at Pont Oscar, with Rosenqvist hitting the rear of Ocon’s car and nosing into the barriers.

Three laps later, the safety car returned to the track after Ed Jones crashed. That eliminated Ocon’s advantage and left him vulnerable to Blomqvist, who attacked on the outside at Pont Oscar. He couldn’t get through there, but did move ahead on the drag out of the hairpin.

A lap and a half later, Blomqvist took the chequered flag to win – his first race after a run of three ten-place grid penalties for an engine change at Hockenheim last weekend.

Ocon, seemingly suffering with damage from the Rosenqvist clash, was 4.5 seconds behind Blomqvist, and only just ahead of two more Carlin drivers Jake Dennis and Antonio Giovinazzi. Dennis continued his positive weekend with his maiden F3 podium.

Dennis van de Laar scored his best result in the championship with fifth ahead of Mitch Gilbert, who survived taking the rear wing off Nicholas Latifi at the hairpin at the restart, with the Canadian crashing into the barriers later in the lap. Lucas Auer and Felix Serralles finished just behind Gilbert in seventh and eighth respectively, with Roy Nissany and Hector Hurst avoiding the chaos to pick up points.

Among ten drivers who failed to finish, Jordan King was involved in the Gilbert-Latifi clash at the hairpin, ending up in the barrier and leaving Antonio Fuoco with nowhere to go when he took the outside line.