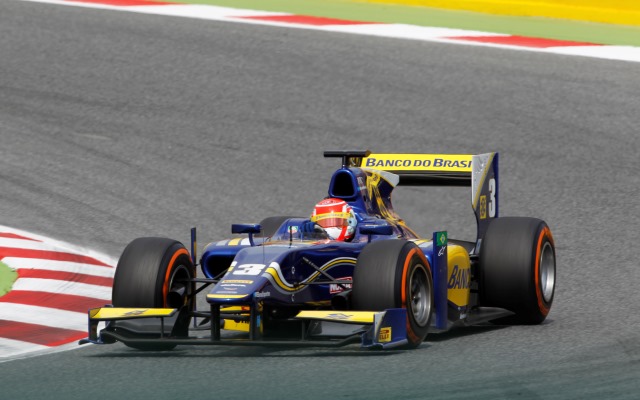 Felipe Nasr finally claimed his first GP2 win on his 50th start in the series in the Barcelona sprint race.

Tom Dillmann retained the lead from pole position ahead of Nasr, who made a good start from sixth on the grid. The Williams reserve driver successfully moved for the lead on lap two.

Jolyon Palmer also moved forward at the start from seventh on the grid, and moved into third after Rio Haryanto went off at turn eight on the first lap following contact.

Palmer then forced his way past Dillmann on lap five and began pressuring Nasr for the lead. Nasr managed to keep ahead, and began pulling away in the latter part of the race. Late on, Palmer slashed the lead from 2.2 to 1.1 seconds but immediately locked up at turn one and ran deep.

That allowed Nasr to escape to claim a 7.6 second win.

Palmer kept up his record of finishing every 2014 race on the podium, and was six seconds ahead of an all-French fight for the final podium spot. Dillmann held off the advances of Arthur Pic to claim third on a one-off appearance in place of the injured Andre Negrao at Arden.

Julian Leal was fifth. Mitch Evans held sixth for much of the race after rising from 14th on the grid on lap one, but the Russian Time driver struggled with tyre wear late in the race and was eventually shuffled down the field. Feature race winner Johnny Cecotto bided his time before capitalising on a lock-up from Evans to make a clean pass for sixth.

Monegasque pairing Stephane Richelmi and Stefano Coletti completed the points with Adrian Quaife-Hobbs and Stoffel Vandoorne rounding out the top ten – the latter after passing Tio Ellinas and Evans in a couple of corners.

Series debutant Ellinas had started on the front row but dropped back on the first lap and lost out in the fight to get past Evans.