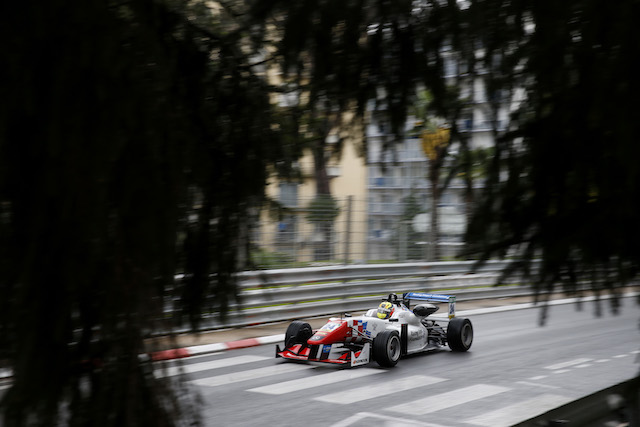 The Racing Steps Foundation-backed driver was promoted to second on the grid?because of the penalty his team-mate?George Russell?carried over from the Hungaroring clash with?Maximilian Gunther that gifted Barnicoat his maiden win.

He then inherited the lead off the start as Lance Stroll bogged down badly from pole, and opened up a two-second lead on the first lap.

That quickly became a five-second margin as Gunther and Cassidy fought over second place, but his comfortable margin was eradicated by a safety car after?Li Zhi Cong crashed at Parc Beaumont.

But instead of Gunther challenging Barnicoat at the restart, the German was caught napping by Cassidy who pulled off an outrageous move around the outside of the fast first corner to snatch second.

Cassidy briefly caught Barnicoat in the first sector of one lap, only for the Briton to immediately respond with a personal-best sector two, going on to stretch his advantage to nearly 2.5 seconds.

Gunther took third,?protecting his championship lead ahead of two races that he will start towards the rear of the grid after his crash in second qualifying.

After gaining a couple of places at the start, Russell spent the race trying to challenge?the Prema drivers, but had to settle for fourth ahead of?Callum Ilott, who never really had the?speed of those ahead despite his pace earlier in the weekend.

Niko Kari will be investigated for separate incidents with?Pedro Piquet and?Arjun Maini?- the former lost his front wing in?the Turn 1 barrier and the latter was spun around at the hairpin. The Finn had started from the pit-lane following a post-race incident with Piquet at the Hungaroring.