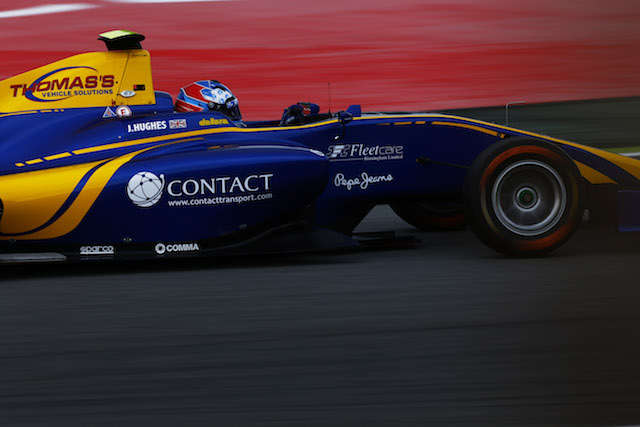 Jake Hughes took?a stunning pole position for the first race of the GP3 Series season at Barcelona, with fellow Formula Renault graduate?Kevin Jorg making it a one-two for new entry?DAMS.

The competitiveness of the field was demonstrated by a wide-open session, but it was an ART Grand Prix 1-2-3 led by?Charles Leclerc with a few minutes left on the clock.

Hughes however went three tenths of a second faster than the pre-season favourite with a lap that would not be beaten.

Team-mate Jorg got closest, but fell 0.14s short of the Briton.

Sharing the second row of the grid with Leclerc will be Honda protege?Nirei Fukuzumi for his first ever race in Europe.?Jake Dennis was fifth for Arden, with Jenzer’s?Oscar Tunjo and?Trident’s?Antonio Fuoco slotting themselves in behind him and contributing to Alex Albon slipping from third to eighth.

Ralph Boschung?was ninth, and?Jack Aitken was 10th – furious to be impeded by a Koiranen car late on.?Nyck de Vries could only manage 11th,?Matt Parry was 17th and the other?DAMS driver Santino Ferrucci only 18th.

Alex Palou had a nightmare on home ground, with an apparent gearbox issue on his Campos car on his second run leaving him 24th and last.