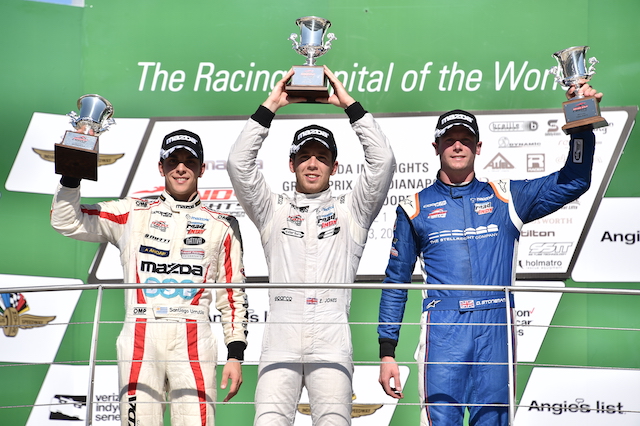 Ed Jones was sitting in third place with four and a half laps?to go in the first Indy Lights race at the Indianapolis Motor Speedway road course,?but took an opportunistic?victory in Friday’s 30-lap race.

The action kicked off almost immediately.?Jones approached the first corner three-abreast on the inside of both?Santiago Urrutia and?RC Enerson. The move did not work as planned, and Enerson was forced to take the escape route past the first two corners. Several other drivers made contact and spun behind them, including?Neil Alberico,?Shelby Blackstock?and?Zachary Claman DeMelo.

Just one lap later,?Dalton Kellett?and?Juan Piedrahita were taken out in a collision at the same first corner. From there, Jones moved into the lead, and?Dean Stoneman had already moved up from sixth into second, with Urrutia battling?Felix Rosenqvist?for third along the way.

On Lap 22, a collision at turn 15 between?Scott Anderson?and?Scott Hargrove triggered the race’s only safety car period, setting up a dramatic restart with just five laps remaining.

Off the restart, both?Stoneman and Urrutia made their way past Jones as the leader locked up into turn 1. But as Urrutia attempted to challenge Stoneman for the lead of the race at turn seven, both rookies?ran wide at the exit in their haste to challenge the position – allowing the Carlin car of Jones to move back into a lead which he would not relinquish.

Jones, who led all 30 laps of the race, becomes the first repeat winner in the Indy Lights season, having won at the first race at Barber Motorsports Park. With his fifth career Indy Lights victory, he also extends his lead in the championship table to 21 points.

Urrutia ended up taking second place from Stoneman – it’s the second straight podium for Urrutia, and the first Indy Lights podium for Stoneman. Rosenqvist sacrificed downforce for straight-line speed on his setup, but fell just short of a podium in fourth. He did finish ahead of his Belardi teammate,?Zach Veach, who completed the top five.

Kyle Kaiser maintains second in the championship with a sixth place finish, while?Felix Serralles dropped to seventh on the final lap after trying to pass Rosenqvist. Enerson finished a frustrating eighth,?Andre Negrao was ninth, and Blackstock completed the top ten despite his first-lap misfortune.