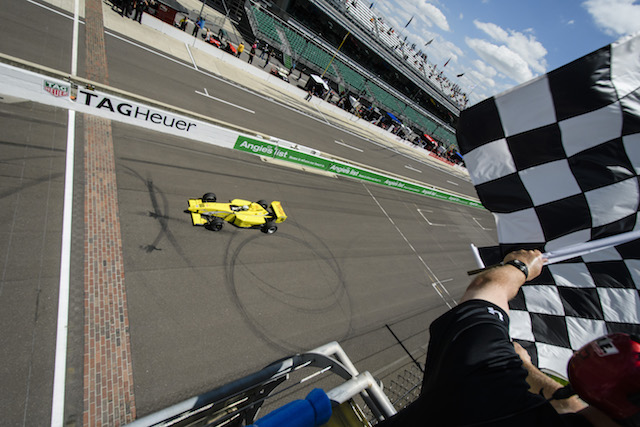 Patricio O’Ward sped uncontested to victory in the first of two Pro Mazda races at the Indianapolis Motor Speedway, the fourth victory in five races for Team Pelfrey’s?championship leading driver.

O’Ward sailed off into the distance as his nearest rival, teammate?Aaron Telitz, made several errors on the opening lap that culminated in the American rookie overshooting turn seven and dropping to the back of the field.

From there, O’Ward steadily built his margin, and never looked back in leading all 29 laps of the 40-minute race and winning by a comfortable margin of 6.85 seconds.

Will Owen?finished in second for Juncos Racing, ahead of his teammate, Australian rookie?Jake Parsons in third – both drivers recording their first podium finishes of the 2016 Pro Mazda season. Parsons held off?fourth-placed?Garett Grist for the final podium place – ensuring a Juncos 2-3-4 finish.

Nico Jamin?recovered from an early mistake and came home in fifth.?Jake Eidson in the second Cape Motorsports entry finished sixth, and Telitz could do no better than seventh after his first-lap troubles.?Nicolas Dapero finished eighth after racing hard for top five places.

Bobby Eberle?finished ninth overall to take the honours as the top Expert class racer, with?Bob Kaminsky finishing tenth in his first race of the season.?Kevin Davis?was the only retirement of the race, suffering a mechanical failure after 16 laps completed.

At the end of the afternoon, though, it was O’Ward’s dominant form that was the focus of the race – and for a driver that is not yet confirmed to race beyond the following race meeting at Lucas Oil Raceway due to sponsorship reasons, his performance will only add to his case to stay on for the full season.