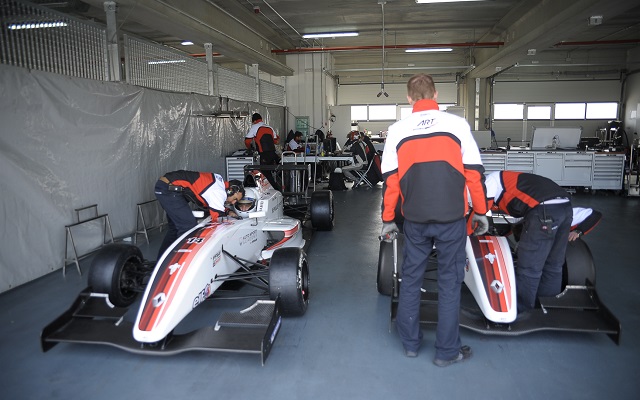 A 33-car entry list for the pre-season Eurocup Formula Renault 2.0 test at Motorland Aragon has just been released by the series organizers.

Reigning series champions Tech 1 Racing will field the biggest number of cars during the test, with three cars for the upcoming Eurocup season and a further two machines for the Alps championship. French F4 champion Anthoine Hubert will test with Tech 1 alongside 2013’s top Eurocup rookie Egor Orudzhev and karting graduate Vasily Romanov – all having been confirmed for a 2014 spot in the French team’s lineup. They will be joined by two of Tech 1’s Alps drivers in Luke Chudleigh and Akash Nandy.

The 2012 Eurocup champions Josef Kaufmann Racing will field confirmed drivers Kevin Jorg and Ryan Tveter alongside Louis Deletraz, who is part of their Formula Renault 2.0 NEC lineup. Fortec Motorsports will also test with two of their Eurocup drivers, Martin Rump and Matt Parry.

Koiranen will field Ignazio D’Agosto, who has already signed on for the 2014 season, and McLaren junior Nyck de Vries, with the third car taken by Nicholas Surguladze – a South Africa-born Georgian karting graduate who raced in the CIK-FIA World Karting Championship Under 18.

ARTA Engineering’s Eurocup signings Simon Gachet and Darius Oskoui are joined by Formula BMW Talent Cup graduate James Allen, who will race with the team in Alps and is set to do guest rounds in the chief FR2.0 category. Interwetten, rebranded as China BRT by JCS, will field single-seater returnee Christof von Grunigen and much esteemed Swiss youngster Matheo Tuscher, who finished second in Formula Two’s final season in 2012.

AV Formula, who are reportedly seeking a full-time entry into the Eurocup, will be present with three cars. French F4 graduate Matevos Isaakyan and Formula Renault 1.6 NEC champion Roy Geerts will both do the full test, while local racer Inigo Bikuna will share testing duties for the third car with a yet to be confirmed driver.

The test will take place on 23-24 February, with two sessions per day of running.