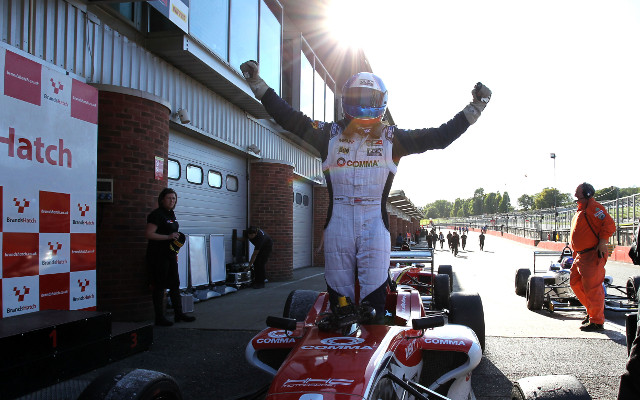 BRDC Formula 4 champion Will Palmer ended the season with his 12th win of the campaign in the final race at Brands Hatch.

Palmer finished ahead of Harri Newey and Tom Jackson, who secured second and third respectively in the final standings by taking those same positions in the race.

At the start, Palmer held the team ahead of HHC Motorsport team-mate Newey from pole position, before the safety car was deployed for a Clearways incident that eliminated Chris Mealin, Omar Ismail and Fernando Urrutia.

After the restart, Palmer began to pull away from the rest and ended up 5.6 seconds clear of Newey, who was pursued to the flag by Jackson after the CDR driver leapt from sixth to third off the start.

Ciaran Haggerty?had started the race just three points behind Jackson and third on the grid, but he fell down the order with a slow start.

Being only eighth at the flag cost the Scottish rookie fourth in the points race to Rodrigo Fonseca, who completed a formation finish for the final top four.

Eight seconds back from the top four at the finish was Sisa Ngebulana, who successfully defended fifth under pressure from a train of cars that filled the rest of the top 10; Jack Lang, Jordan Albert, Haggerty, Ameya Vaidyanathan and Jack Bartholomew.

The race was the final appearance for the first-generation BRDC F4 car, with the new Tatuus-Cosworth to be introduced in the eight-race Autumn Trophy in November.