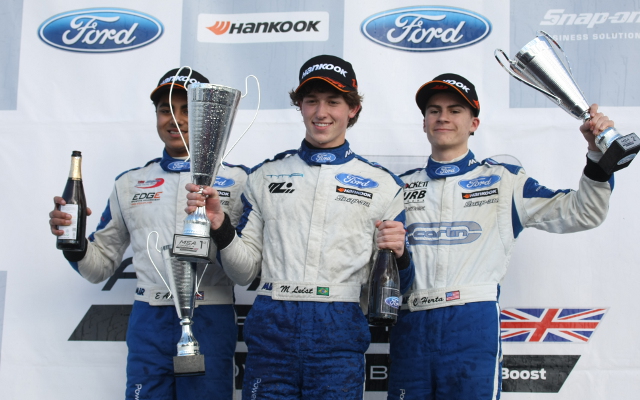 Matheus Leist emerged from a chaotic final MSA Formula race of the weekend at Silverstone with his second win of the season.

The Brazilian started on the front row alongside championship leader Lando Norris, but was bumped down to third by a fast-starting Toby Sowery at the first corner.

He was into the lead by the end of lap two though, after Norris and Sowery collided at Brooklands under what appeared to be safety car conditions – or waved yellow flags at the very least – as marshals dealt with the aftermath of opening-lap carnage at the same corner.

That had begun with Ricky Collard tipping Dan Ticktum into a spin, before Tarun Reddy, Sandy Mitchell and Rafa Martins came together in a chain reaction.

Sennan Fielding also dropped out of the race after slowing with a reported gearbox issue.

At the restart, Leist led from Colton Herta, and the Brazilian stayed ahead until the chequered flag, winning by 0.671 seconds.

Collard restarted in third place but with serious front wing damage that slowed him down and allowed his Arden team-mate Enaam Ahmed to get by.

With Norris a lap down after having to pit, Collard was on course to take the championship lead if he could finish fourth but he too would pit with four laps to go and did not return to the fray.

James Pull was on course for fourth before a clash with his former JTR team-mate Dan Baybutt at Copse. That promoted Darius Karbaley to fourth, a considerable improvement on his previous best finish of ninth and coming after two weekends away from the series.

Louise Richardson survived contact with Petru Florescu early on to end up fifth in front of Jack Butel and Florescu, while Baybutt and Greg Holloway rounded out the nine lead-lap finishers.

Norris was able to take the finish one lap down in 10th, and added an extra point to his advantage over Collard, meaning he heads to the Brands Hatch finale with an 11-point margin. Herta has climbed to third in the standings ahead of Fielding and Ticktum.

UPDATE: Tictkum has been excluded from the whole Silverstone weekend for overtaking under the safety car and then colliding with Collard. He has had six penalty points added to his license and the incident has been referred to the MSA for further action. Sowery has been given a five-place grid drop for his next race and received three points.